Assam Association,Chennai  is planning to celebrate "Rongali Bihu" on April 14, 2013 at CLRI, Adyar, Chennai. The event will start at 4pm.

27 Feb 2014 - 9:16am | AT News
Forest guards claimed to have killed two poachers at an encounter in Kaziranga on Thursday. Three others are believed to have escaped the encounter that struck the Burapahar range of the abode of one... 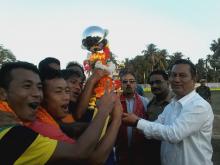