Poll related violence refuses to die down. Two more people were killed in police firing in Dhubri district on Friday. The incident took place during poll counting in Hathsinghmari area of the South Salamara sub division when a group of men allegedly tried to storm into a counting centre and destroy ballot boxes for the elections.
Five other people were also injured in the firing by Assam Police and paramilitary forces.
It comes three days after 20 people were killed in police firing in Goalpara district where protests by the Rabha Hajong tribe during Tuesday's village council elections triggered violence.

The police said it has had to open fire because members of the Rabha Hajong tribe were burning down villages and attacking government officials. It took the death toll to 23. 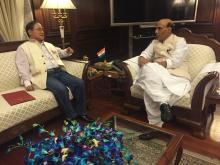