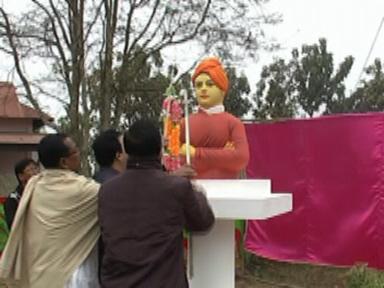 The day’s programe began with playing of patriotic song through fixed loud speaker in the morning. A spectacular procession was taken pout from Haflong Cultural Hall with beautifully decorated portrait of Swamiji and marched through Haflong town and converged at the premised of Ramkrishna Seva Samity.

This was followed by hoisting of flag by Sri Hiranmay Bathari, President, Ramkrishna Seva Samity, Haflong.

The prime event of the day’s programme, unveiling the statue of Swami Vivekananda was done by Sri M K Das, Additional Deputy Commissioner, Dima Hasao as chief guest in the premises of Ramkrishna Seva Samity, Haflong.

Several speakers attending the function dwelt at length the brief life sketch of Swamiji and appealed to follow the morals of Swmaiji, who is always considered to be the awakener of India.

4 Dec 2007 - 9:07am | editor
An all party delegation will be leaving for New Delhi on December 9 to press the demand for ensuring ST status to the Adivasis, Morans, Mataks, Koches, Chutias and Ahomes.The decision was taken at an...

1 Nov 2017 - 9:44pm | AT News Shillong
To ensure free and fair conduct of the upcoming Legislative Assembly Election 2018 in Meghalaya, the State Level Media Certification and Monitoring Committee (MCMC) is constituted with the Chief...

12 Jul 2012 - 5:21am | editor
Assam agriculture minister said that the flash floods affected 2,54,000 hectares of cropland across 23 district affecting over 10 lakh families. Talking to reporters in Guwahati on Wednesday, he said...