Unknown Naga person threatened to kill reporter Nakibuddin Ahmed of Nazira from mobile number 08729804852 at 11-05 A.M on Friday. An FIR is already lodged in Nazira Police Station by Ahmed and the Freelance Journalist Association of Nazira. Different organisations of Nazira including AASU, AJYCP etc condemned the incident and demand to nab the culprit immediately.

Due to the lack of proper vigilance and in sufficient security the Assam Nagaland border of Gelakey becomes a free zone of different insurgent grupes like NSCN. Over 1000 bighas land of Gelakey Jungle area is already occupied by Nagaland with the help of insurgent groups. 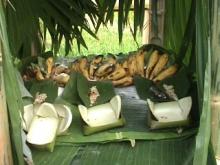 16 Sep 2010 - 3:07pm | editor
Like the other communities of the world, the tai-ahom community of assam observe one of their harvest festival as Ai-Jong-Lao. In tai language Ai-jong-lao means the welcoming the wealth. The Tai-...

20 Oct 2013 - 9:24pm | AT News
Guwahati seems to have wore a fresh look. But why? Roads are being repaired, street lights in the city start dazzling in broad day light. The answer is simple. President Pranab Mukherjee is on a two...