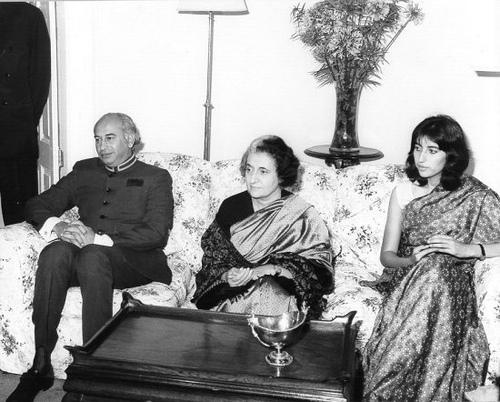 Strife torn Pakistan witnessed yet another blood bath when a suicide bomber detonated himself inches from Pakistan’s former Prime minister Benazir Bhutto after she was leaving an election rally in Rawalpindi’s Liaqat Bagh Park. A gunman also shot her on the neck and chest ensuring that Bhutto does not escape death for a second time. Bhutto had earlier escaped a bid on her life on October 18 at Karachi in which 140 people died.

Leaders in Pakistan it seems are either doomed to have violent deaths or are banished from their native lands. Benazir’s father and former Prime minister Zulfiquar Ali Bhutto was hanged in this garrison town in 1979 after a military coup. Pakistan’s first Prime Minister Liaquat Ali Khan was killed in 1951 in the same park where Benazir met her end. Nawaz Sharif yet another former prime minister was similarly banished from the country he ruled.

Benzir’s death has created a vacuum in Pakistan’s political scenario. Benazir was a leader to reckon with an iron lady who had the capacity and nerve to control a volatile nation like Pakistan. Her death triggered an upsurge of emotions in many parts of Pakistan turning it into a battleground of sorts as soon as news of her death spread. Benazir supporters angered by the assassination of their leader are thirsty for Musharraf’s blood and shouting "dog Musharaff", "Killer Musharraf" slogans.

Bhutto served twice as Pakistan’s Prime Minister between 1988 and 1996. She had returned to Pakistan from an eight- year exile on October 18.

Bhutto’s return to her country after years of exile and the ability of her party to contest free and fair elections had been a corner stone of Bush’s policy in Pakistan as it was observing the rising authoritarianism of Musharaff with concern.

With such a twist in the tale the elections in Pakistan hangs in balance. Pakistani leaders are slated for a trial by fire before anyone emerges as a leader of a nation of dissidents.

Permalink Submitted by charlie on Fri, 28/12/2007 - 14:29
ITS OUR NEGHBIOUR COUNTRY BUT WHAT I FEEL ITS REALLY HORRIBLE NEWS AND PRESIDENT OF PAKISTHAN ALWAYS(FROM FIVE YEARS HE TOLD THIS) TOLD WE WILL CRUSH AL-QUIDA,TALIBAN AND AFTER THESES INCIDENT EVERYBODY WILL THINK WHERE IS COMMITMENT? SPECIALLY U.S.A.

Permalink Submitted by jaay on Sat, 05/01/2008 - 04:24
ItÃ¢â‚¬â„¢s a tragic incident and who can feel the pain more than us, who have lost numerous leaders to the terrorists in past. But you missed some major issues in your article, did I not read them or did you purposely left them off? It gives me no pleasure in pin pointing at this hour that the daemons struck back on the same very people who nurtured them and yes Just because she was a lady, she does not automatically qualifies to be an Ã¢â‚¬ËœIRON LADYÃ¢â‚¬â„¢. Rather, if we see the things in the right prospective, it will be clear to us that she pursued the same hateful policies which were handed down to her vis-ÃƒÂ -vis Ã¢â‚¬ËœWE WILL GIVE THOUSAND CUTS TO INDIAÃ¢â‚¬Â¦.Ã¢â‚¬â„¢ If this is an obituary, well itÃ¢â‚¬â„¢s OK, but if this what you feel about Ms Bhutto, then I am sorry, please do some more research. TALIBANS, Anti India Stance at UN, AQ Khan, proximity to Chinese just to downcast India, all this and more were the direct results of Ms Bhutto in Pakistan. I was travelling in a taxi, driven by a Pakistani in Houston Texas, this was about couple of months from now, he told me that People were against Bhutto so much, not because she was a women, but because of the RAAJ she created when she was in power, when people were dying of poverty and hunger, HER HORSES WERE BEING FED WITH APPLES. And I am not making it, I have heard it from the people where she belonged to and they believe that she was a setup by US to pursue American interest in Pakistan and mind you please do not read that it was favorable for India too. What worse could have been than having Americans stationed on Indian border? Remember, Rajiv Gandhi had to rush Indian Peace keeping force to Sri Lanka, just to ensure than Americans are kept out. Only history has the right to judge about the current happenings. We can only pray that things remain peaceful as the happenings are suggesting otherwise. God bless Ms BhuttoÃ¢â‚¬â„¢s soul and offer her peace and I pray to god that he saves her children from the political fire.

24 Apr 2014 - 7:11am | AT News
Voting is underway in Guwahati Lok Sabha constituency with a peaceful note on Thursday. The turn out is expected to be huge in view of the rush of voters in front of the polling booths.Altogether19,...