Rising incidents of Man-animal conflict has spread in Dima Hasao also, killing one 60 years old man of Khrumingdisa village under Umrangso Police station on Friday. One Bidyanan Kemprai was killed by a wild elephant on Friday at about 5 PM when he was returning from sand quarry near Kopili River.

It is learnt that like every year, few weeks back a herd of wild elephant numbering 30/40 were seen in and Umrangso area and the villagers tried to drive them out of that area. And last year also one man was killed near Bungphri area near Sangbar.

Mentioned may be made here that every year elephants used to come to this area during this season as there has been a salt water lake and perhaps for ripe paddy but the villagers, out of fear disturbed them by crackers. It is also said that this area has been used by the wild elephant as their corridor since long. 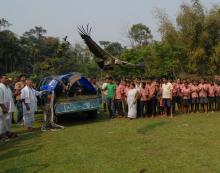 14 Mar 2015 - 2:26pm | Subhamoy Bhattacharjee
After rapid recuperation, the nine vultures in Tinsukia are flying freely in the sky a day after they were released by the forest officials on Friday. Before being released, veterinary doctors...

29 Apr 2015 - 10:42pm | Hantigiri Narzary
Security forces have apprehended three hardcore cadres of NDFB-S along with arms from different places of Kokrajhar and Sonitpur districts on Wednesday.According to a tiptop information about...