Bodo rally in Delhi against B’deshis

Bodo people on Tuesday staged demonstration in Delhi demanding a judicial probe into the recent riot in BTAD areas alleging that immigrants from the neighbouring Bangladesh have been mongering trouble in these districts.
The demand was made at a huge rally near the Parliament House by hundreds of people who staged protest under the banner of the Coordination Committee of Indigenous Tribal National Organisations.
They sought a permanent solution of the problem and made a plea for grant of statehood to Bodoland through peaceful political dialogue and granting of autonomy to all indigenous tribals of Assam under the Sixth Schedule of the Constitution. 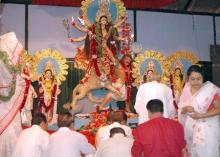 18 Oct 2007 - 6:03am | bonbon
It’s that time of the year once again, yes it is time for Goddess durga to come down to the mother earth for us to show regards and pay our tributes to her. The festive smell is already there...

7 Sep 2015 - 7:46am | AT News
Allegations of rape and molestation put two political leaders in trouble a couple of months before the assembly polls.  The first one sensational allegation came to Mandira police station...