Assam Chief Minister Tarun Gogoi has urged the Centre to change the pattern of fundings in the Central-government scheme saying that the decrease in the borrowings from small savings could force Assam to rush to bigger market borrowings.

Addressing the 54th National Development Council (NDC) on Wednesday in the capital, the Chief Minister stressed fulfilment of the pending demands. Further, he deplored that that his state finds it difficult to provide the State share against various CSS without materially affecting the allocations for other important development sectors like agriculture. The State Government has been requesting for a change in the funding to a uniform pattern of 90:10 for all schemes for the Special Category State.

The Chief Minister also stressed the need to increase the generation capacity, which is only 16 per cent of the present peak requirement. Transmission and distribution network has to be strengthened to deliver benefit to all sectors of development. 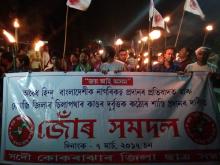 7 Mar 2017 - 8:02pm | AT News
Hundreds of students union activists from AASU,Goria Maria Desi Jatiya Parishad and common publics join hands in the protest torch rally carried out in Kokrajhar town in protest against the attack on...

13 Dec 2015 - 4:47pm | Drishana Kalita
Can genetic research be used to protect wildlife? Aaranyak, a Scientific and Industrial Research Organisation based at Guwahati, has proven that the answer is a resounding ‘Yes’. After breaking new...