Centre for Civil Society (CCS) brought down the curtains on the 9th Annual Jeevika: Asia Livelihood Documentary Festival on Sunday 2 September 2012 at the India Habitat Centre. The festival honoured professional and student documentary filmmakers covering livelihood issues that raised consciousness on the trials and tribulations faced by many to attain a life with dignity.

Over the course of three days, the festival saw the participation of hundreds of people including diplomats, professionals, aspiring filmmakers, students, professors, media spokespersons and many other weekend revelers. 68 films were submitted, out of which 18 documentaries were shortlisted showcasing various aspects of livelihood such as the hardships faced by Mumbai’s night rat killers, the near extinction of Kerala’s adivasi population, the loopholes of the Indian judicial system and many more appalling and sensitive issues.

The film festival was inaugurated by the screening of Wagah by Supriyo Sen and Bom ‘One Day Ahead of Democracy’ by Amalan Datta. Alongside film screenings, the festival organised insightful speeches and panel discussions such as the Law, Liberty & Livelihood talk with Amit Chandra, Campaign Coordinator of Jeevika and Parth J Shah, President of Centre for Civil Society on the importance of deregularising market entry for livelihood freedom. The panel discussion on documentary & public policy led by Nandan Saxena & Anasuya Vaidya captivated aspiring filmmakers, as he shared best practices on capturing compelling stories and building a following that cares for social change. Saxena said, "Documentary is the most flexible mode of showcasing anything. It is an extremely useful tool to raise awareness and sensitise audiences about relevant issues".

Subhash Ghai, noted Film director, joined Jeevika to address the audience on filmmaking and the need to transform education in India to improve understanding on livelihood issues and inclusive development. Mr. Ghai has extended his support to Jeevika and the 18 shortlisted filmmakers by inviting their films to showcase at his institute, Whistling Woods International in Mumbai. As the evening came to a close, the energy levels were kept high thanks to the enthralling performances by dance troupes Nritya from Sri Venkateshwara College and Oorja from Hansraj College. Following their performance, Anjan Roy, Economic Advisor, Associated Chambers of Commerce and Industry (ASSOCHAM) and Amir Ullah Khan, Economist & Deputy Director, Bill and Melinda Gates Foundation stimulated critical thinking on various issues plaguing the informal sector.

The festival celebrated the top three filmmakers by awarding them a Jeevika trophy and cash prize. The first prize in the professional category was awarded to Bishnu Dev Halder, for ‘I was Born in Delhi’, a feature documentary shot over a period of five years, showcasing the effect of social deprivation and poverty of two young girls, and their experiences dealing with the harsh social realities of life in a metropolis.

‘Shifting Undercurrents-Seaweeds Collectors of Gulf of Mannar’ by Rita Banerji documents the struggle of women seaweed collectors, took second prize and ‘We are foot soldiers’ by Debolina Dutta and Oishik Sircar, a sensitively handled film depicting the struggle and fight for dignity of children of sex workers rounded of the top three. The film ‘Dimond Band’ by Samridhi Dasot, conveying a story about a wedding music band won the Best Student Documentary Award.

‘The Rat Race’, a documentary by Miriam Chandy Menacherry won the Special Mention at the festival. The film previously screened in Amsterdam and at Cannes in 2011 before making its cinematic debut in India. The gritty, true life account of Mumbai’s night rat killers was shot over two years, unraveling the story of rat-control each night as the city slept.

30 Sep 2012 - 2:29am | editor
One more rhinoceros was found dead at the Kaziranga National Park on Saturday. The carcass of the mature female rhino was found floating in the flood waters at Gorakati under Bagori Range of the park... 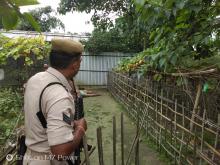 27 Jun 2019 - 10:07pm | AT Kokrajhar Bureau
Kokrajhar:  Sensation prevailed along the Mukhigaon area in Kokrajhar district after three member of a family was murdered by unidentified miscreants late night at Mukhigaon village. Police has...