No halt in rhino poaching

4 Aug 2016 - 2:32pm | AT News
Poaching refuses die down in the flooded Kaziranga National Park where 3 rhinos were killed for horns during the last 24 hours. That too in the presence of forest minister Pramila Rani Brahma, who... 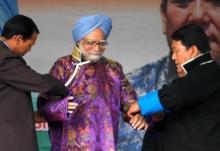