Altogether 35 militants laid down their arms before Chief Minister Tarun Gogoi at a function in Tezpur on Saturday.
Twenty seven of them were from the Karbi Peoples' Liberation Tigers (KPLT), six belonged to the National Democratic Front of Bodoland and two from ULFA. They further handed over a large number of arms and ammunition on Saturday. 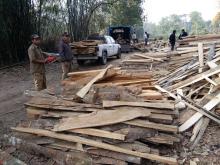 1 Feb 2017 - 11:25pm | AT Kokrajhar Bureau
An illegal sawmill was seized along with huge timbers at Khalugaon village this afternoon during a joint search operation in Kokrajhar district on Wednesday. The seized timbers would be amounting of... 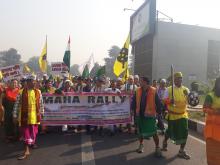 29 Nov 2017 - 4:53pm | AT News
NEW DELHI: Nearly 200 people from BTAD areas hit the streets in New Delhi on Wednesday demanding seperate Bodoland statehood saying that it is only the way to help these huge tribal group...