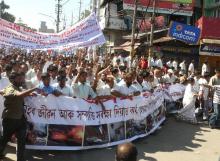 26 Jun 2016 - 10:27pm | Jayanta Kumar Das
Situated in a critically backward area near Bhutan border,people of Dimakuchi had been suffering much due to iliteracy, financial backwardness and transport bottlenecks.A meeting was recently...