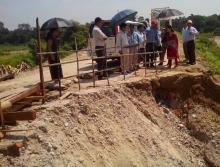 18 Nov 2016 - 9:40pm | Daya Nath Singh
Archaeological Survey of India, Guwahati circle, has been trying to take-up the work of repairing of a broken pillar in the Mandap of Hayagriva Madhav Temple at Hajo for a long time. ASI, Guwahati...