Two more molesters have been arrested during the last 12 hours in connection with the Guwahati incident a day after a police officer with Dispur has been suspended alleging dereliction of duty. According to information, with this, the total number of arrested persons in Monday's molestation incident has gone up to 6.

The duo were identified as Diganta Basumatary and Navajyoti Deka. On the other hand, Sub-inspector Subhan Baruah of Dispur police station has been suspended. The action came after Chief Minister Tarun Gogoi gave direction to the police on Saturday to arrest the culprits within 48 hours. 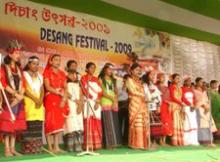 12 Jul 2008 - 1:49pm | editor
The ULFA cadres and leaders who have recently announced an unilateral ceasefire with the government on Friday have entered the designated camp set up by the government. These people include Mirnal...

7 Jul 2010 - 2:46pm | editor
A medical student who remained traceless from Guwahati for around 24 hours has been rescued in Siliguri on Wednesday morning. According to information, Kaushik Kotoky, the son of B Barooah Cancer...