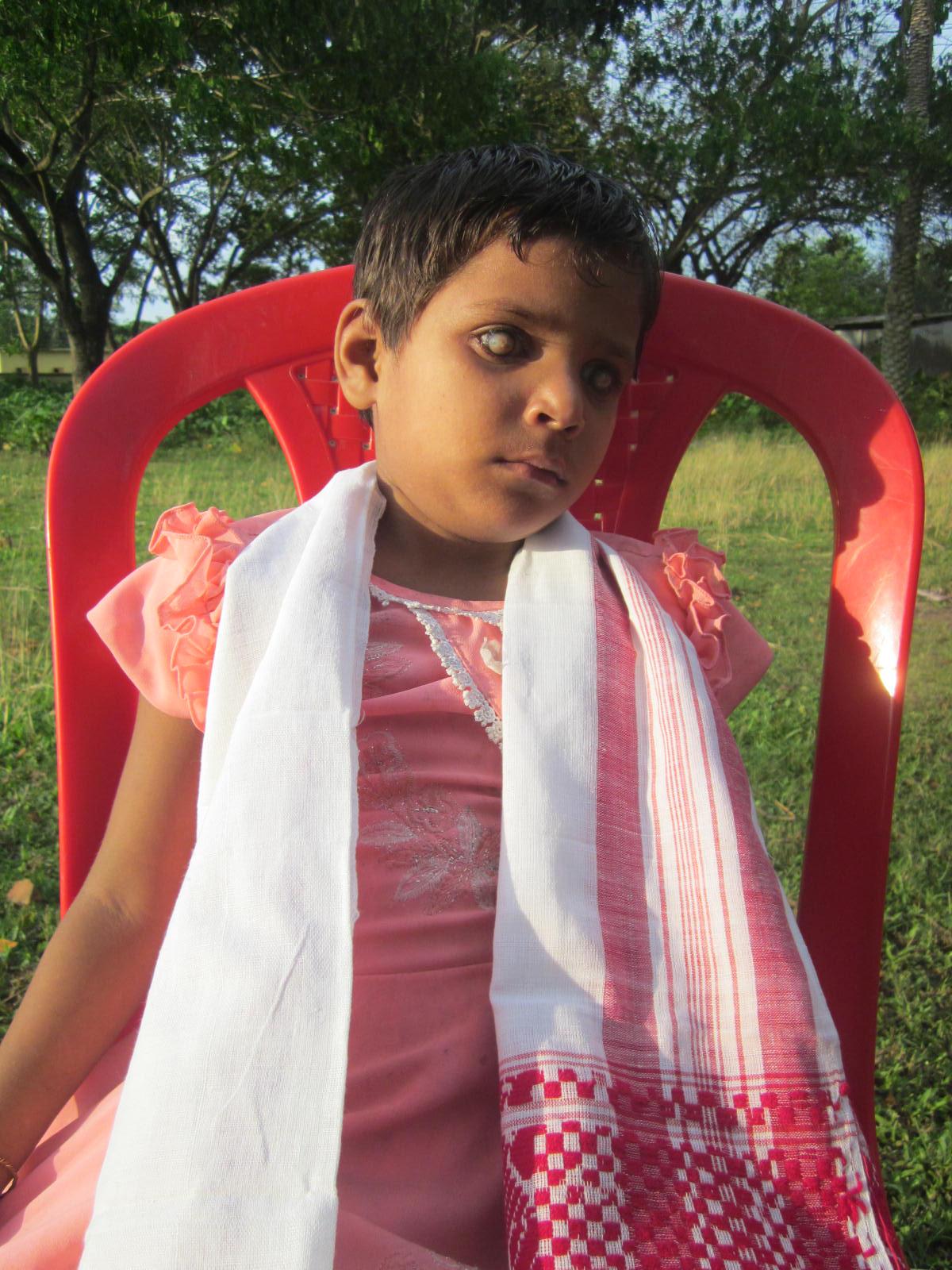 She lost her mother when she was just eight months old. Her mother Lakshi Dey died in a mysterious burning incident in Birubari,Guwahati five years back. Father Syamol Dey had abandoned her the very next year and was disappeared forever. Grandfather Pramod Debnath took helpless Priyanka to his house at Puthimari village near Kalaigaon after the death of her mother. Life was colorful for Priyanka at the company of her grandfather. But something terrible was waiting for little Priyanka. She lost her vision completely in 2009 due to pox infection. Illiterate Pramod could never understand that she was loosing her vision. It was too late to realize the cruel reality. This is the miserable heart rending story of a 5 years old blind girl of Puthimari village near Kalaigaon.
This correspondent saw sad Priyanka at a programme at Gandhi Bakori on July 13 organized by DKN (Durgat Kalyan Nyas) an NGO founded at Kalaigaon to help poor and sick. DKN has arranged financial assistance to eleven meritorious student coming from poor families who had shown good results in the last HSLC and HS examination 2012. The NGO also provided financial assistance to three critically ill patients including Priyanka Dey. It needs mention that DKNhas been giving financial assistance to poor and sick people for last four years. The programme was presided over by its founder President DN Hazarika, Circle Officer,Harisinga Revenue Circle,Tangla. Attending the charitable session as the chief guest,Bikon Deka,Senior Manager, Bhutiachang TE and Chairman ABITA,Mangaldai Circle declared that he would arrange complete education for the blind girl in Kolkata along with possible treatment. Tears rolled from the eyes of grand father Pramod when the declaration was made. Bikon Deka also personally donated an amount of rupees ten thousand to DKN.On the occasion,he requested poor students and patients not to lose hope at any moment.He cited reference of Sonmoni Bora,IAS, presently serving as City Commissioner in Raipur (Chattisgarh) who too had come from a poor family of Assam. He advised students and others to continue struggle till victory. Prof.Binoy Kumar Medhi (ex-principal,Tangla College); Sat Ram Deka, Secy. Darrang Zilla Sahitya Sabha; Social worker Kami Ram Saharia, Arabinda Das, Principal,Kalaigaon College and retired teacher Sukleswar Deka also spoke a few words on the occasion.

28 Nov 2015 - 11:11am | Hantigiri Narzary
The Janajati Suraksha Manch has strongly condemned and flayed the Oboro Suraksha Manch for their protest and anti tribal activities in the state which has been indulging to harm existence of tribals...