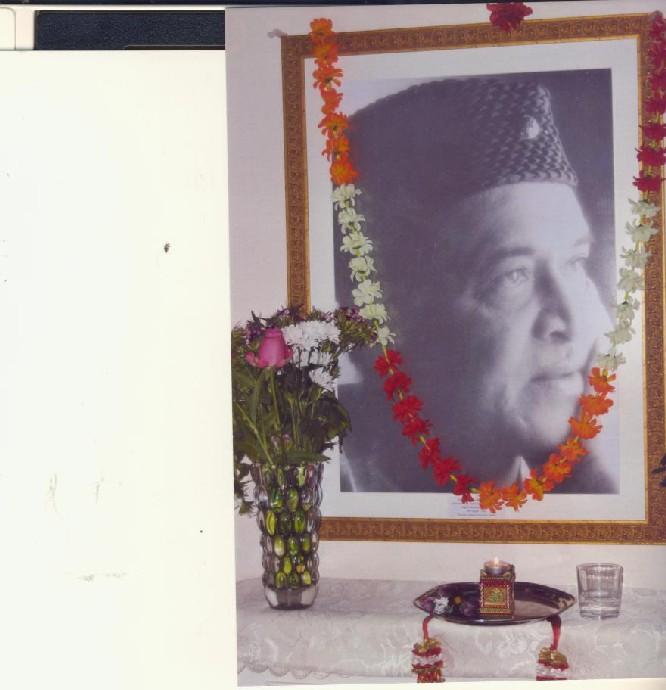 Assam has been fortunate in giving birth to a great musical genius in Bhupen Hazarika. "He was an ardent supporter of Assamese nationalism and wrote many stirring compositions about the cultural heritage of his native State, but his work transcended regional boundaries and the values he espoused were universal. Now that mighty voice has fallen silent. Assam is poorer for it. The world is poorer for it".

It is a significant step towards our endeavour to take Dr. Bhupen Hazarika to the international platform.His artistic excellence and qualities of head and heart set the perfect example of an artist in the truest sense of the term. 5 crowded years of meaningful existence having added significantly in uploading the rich culture and tradition flourishing in Assam for ages.

In his opening speech Gowri Shankar (Deputy Director of Nehru Centre) welcome everybody to Nehru Centre and spoke highly about Bhupen Hazarika. Rini Kakati introduced the dignitaries and invited guests, felicitating with phulam gamosha and Asomiya japi by GeetupalaShah.

Friends of Assam and Seven Sisters (FASS) is an International NGO and have various plans and projects to keep Assam on focus at world map. Thinking of various ways of preserving the memory of the (late) legendary Assamese maestro Dr. Bhupen Hazarika, Rajen Barua, President from Houston, Texas said through an e-mail.

Dr. Jaimini Bhagwati, High Commissioner of India, remembering his personal memories of time spent with Bhupen Hazarika in the 960''s when his late father - Bijoy Bhagwati was an MP at New Delhi residence. "It was the underlying sentiment of solidarity with the downtrodden in Hazarika's work that made him truly great".

Dr. M. Sayeedur Rahman Khan, High Commissioner of Bangladesh, put a white flower at the photograph. He had mentioned that Hazarika was highly respected and considered a source of inspiration for Bangladesh. His support for Bangladesh Liberation Struggle has honoured him "Muktijoddha Padak" the highest civilan award by Bangladesh Government. His emotional song "Ganga Amar Maa, Padma Amar Maa" is popular amongst every Bengali in this earth.

Lord Swraj Paul slowly made to the stage with his walking stick shows how much he loved Bhupen da. And said "everyone whose lives Hazarika touched through his work will remember him for his warmth and sincerity".

Tej Hazarika, Independent publisher, writer and teacher, the one and only son of Dr. Bhupen Hazarika who lives in New York with his wife and son. Was in contact with the organizer for this event. He said "My father looks really handsome in this photograph".

Prabin Hazarika, younger brother of Bhupen Hazarika was in tears when he and his wife, Trisha arrived from Leicester for this historic occasion. He recited his older brother's last poem, 'Akash Saboty' (Embracing the sky) and recalled his childhood days with his brother at their Nizarapara residence.

Kailash Budhwar of BBC Hindi Service, called Dr Hazarika a patriot as he devoted his entire life for the uplift of the poorest of the poor across his region, State, country and the globe. Rita Payne,(President of the Commonwealth Journalists Association (UK) and Editorial Director, Global magazine) - said he was a multifaceted genius, his creativity and love for the nation will always be remembered.

The evening came to an end with a vocal tribute by well-known singer Dr. Ananda Gupta singing "Shobar Hridoye Rabindranath".

11 Jun 2008 - 2:25pm | editor
Hours after the AASU submitted some specific allegations against five cabinet colleagues of Tarun Gogoi to Prime Minister Dr Manmohan Singh, the first one to react with action is power minister...

21 Jun 2016 - 8:43am | AT Kokrajhar Bureau
Police arrested two Ganja smugglers along with seized of Ganja from Duturi area under Bijni PS in Chirang district late last night. According to police, the smugglers were arrested along with Ganja...