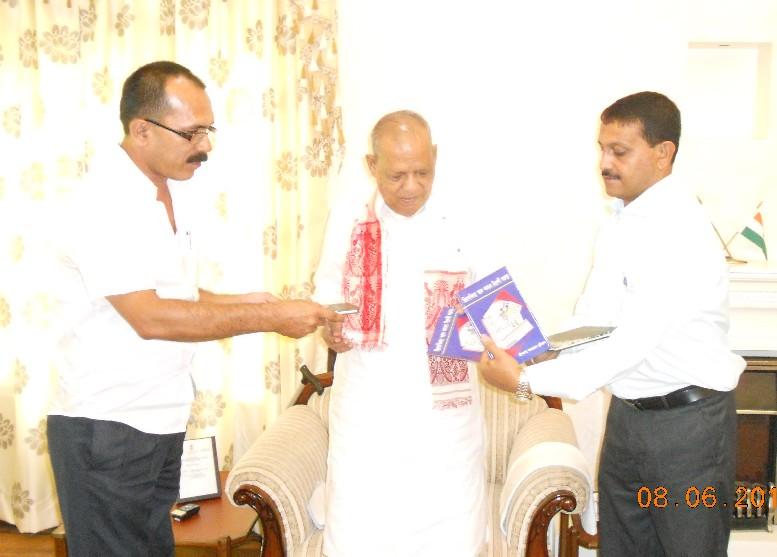 The Governor gave a patient hearing to both the media persons and expressed his willingness to visit Patharighat within a short period. The Governor said that it had been a tragic yet inspiring episode in the saga of the history of freedom struggle but at the same time it was very unfortunate that this glorious chapter of the freedom struggle had failed to get its due recognition in the national level. He assured that he would make all arrangements for organizing a national level seminar in New Delhi so that entire nation could know the supreme sacrifice of these 140 farmers of Patharighat”.

Mention may be made here that the then Darrang Deputy Commissioner Dhruba Hazarika in 2010 had taken up the initiative for taking the Pothorughat rebellion in the national level by holding a national seminar in New Delhi under the banner of “Organizing Committee for the National Level Seminar on the Pothorughat uprising by Agricultural Peasants” and as part of this initiative writer Arup Kumar Dutta at the request of the Organizing Committee has authored the book which was sponsored by a grant from the Assam Branch of Indian Tea association (ABITA). But after the transfer of the Deputy Commissioner this noble initiative remained incomplete.

It may be recalled here that to keep the sacrifice of those ‘Krishak Swahids’ alive and to inspire the younger generation of our country about the rare sacrifice of the peasant martyrs ‘who gave their lives for the freedom we breathe today’ that took place much before the Jalianawalabag massacre heralding the initiation of the freedom struggle in the North East, the troops of Red Horns Division at the initiative of the then Governor of Assam Lieutenant General (Retired) SK Sinha, came forward with the novel idea of construction of the “Krishak Swahid memorial tomb” with inscribing the words “Gone, but not forgotten, never shall thy memory fade.Oh, Martyrs, we salute you” on it at historic Patharighat in the year 2001.And since then the ‘Men in Olive Green’ of Red Horns Division has been celebrating the day of January 29 in a military style and honour with the presence of Division Commander or Corps Commander as the chief guest spreading the message and the meaning of our hard earned freedom. It also needs mention that great freedom fighter of Assam late Pani Ram Das had been a regular distinguished guest at the ceremony every year at Patharighat till his demise in 2011.

Significantly the historic day of January 28 has been celebrated every year by the people of the district with a day long program. The people of the district have been demanding the state government and the army authority to arrange for the presence of the President or the Prime Minister of India and the Chief of Staff of Indian army in the celebration of the ‘Krishak Swahid Divas’ at Patharighat.

BPF takes on NDFB-S over extortion

16 Nov 2014 - 7:25am | AT News
BTC Chief Hagrama Mohilary expressed serious concern over rising incidents of extortion cases by NDFB-S in the BTAD area. He said if need be the Bodoland Peoples Front (BPF) will stage protest rally...

27 Mar 2015 - 10:16am | AT News
The All-Assam Students Union is changing its faces with Dipanka Nath and Lurin Gogoi. The formal announcement is expected on Friday. Nath will replace its president Sankar Prasad Roy will Lurin Gogoi...