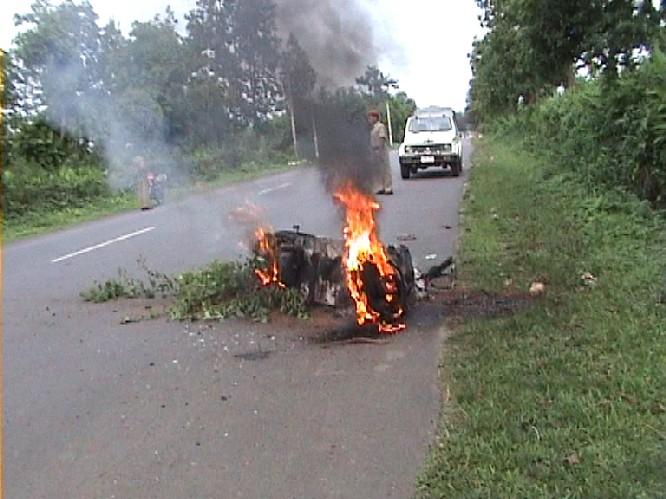 During the 24 hours Goalpara District bandh, which ends today, called by Goalpara District Committee of All Rabha Students Union and six other students organization a Vespa scooter was set ablaze by suspected bandh supporters at Dhanubhanga-Deoshila near Dhupdhara on 37 NH in Goalpara District at around 3.30 pm on Friday. According to sources, when the Vespa scooter (ML 05B-1155) on its way to Daranggiri from Shillong reached the spot suspected bandh supporters stopped the scooter and then set ablaze it. After the incident police reached the spot and tried to control the fire but in vain. The Rabha Students Union along with six other students organization called the bandh in protest against the failure of district administration in tracing the two abducted teachers, Kameswar Rabha and Sarit Rabha, the two BLO workers. The duo were kidnapped on 13th May when they were on duty at Dawaguri village under Agia police station in Goalpara District.

25 Mar 2009 - 5:36pm | editor
A day after the killing of young journalist Anil Majumder lost his life at the hands of gunmen at Rajgarh Road in Guwahati, police remain clueless but have arrested three persons including the driver...

4 Jul 2016 - 10:33pm | AT Kokrajhar Bureau
Chirang police arrested four persons from different places along Bengtol area, who are sympathizer and collected money for the NDFB(S), including Monica Basumatary, wife of BR Ferengga, General...