Assam Chief Minister Tarun Gogoi has come down heavily on Team Anna alleging baseless charges against Prime Minister Dr Manmohan Singh. During his visit to Indian Wood Technology Institute in Bangaluru, he said probe cannot be ordered on the basis of such allegations. Talking to reporters in Bangaluru, Gogoi termed Team Anna's action in targetting Singh as an attempt to tarnish the image of the prime minister and said such attempts are unacceptable.

15 Jun 2013 - 9:55pm | AT News
PP Varma will be new chief secretary. “Today I am making it public. He will take charge after Das retires on the last day of this month," Chief Minister Tarun Gogoi told reporters in Guwahati Varma,... 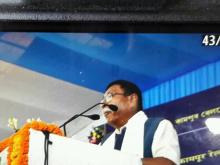