The 24 hours Assam Bandh starting from 5 am of 25th to 5 am 26th May, Jointly called by All AssamTribal Sangha, DSU, KSA, ARSU, TMPK, AATYL, AASKSU, ATSU, MMK, GSU, SKNC, Deuri Students’ Union and other tribal organisation of Assam, in protest against large scale deprivation of SC & St candidate in teacher appointment in the name of TET qualification paralysed normal life at Haflong, Umrangso, Maibang, Mahur, Harangajao etc.
All the government and semi- government offices including banks, market remain closed. Government and private Schools also remain closed. ASTC and Private bus services were suspended. No vehicle, except of security personals’ were seen during the bandh. No untoward incident reported so far. The DSU President, Sri Kebaron Naiding, however, disclosed that if the government did not pay any attention to their demands they would resorted to stronger agitation in near future. They also said on May 31 there would be a convention of all the tribal
organization to chalk out their future strategy. 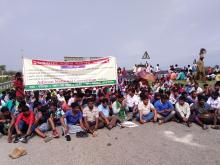 22 May 2013 - 8:50pm | Abdul Gani
The Assam State Biodiversity Board and the Assam Forest Department jointly organised a function to mark the International Day for Biological Diversity at Hotel Brahmaputra Ashok in Guwahati on...