The United Liberation Front of Asom on Thursday slammed police a day after four suspected Maoists were killed at an encounter with police in Tinsukia district. In an e-mail statement, ULFA commander in chief said that the outfit has support to the Maoists and that policemen deployed in the operations should try to learn the lesson of humanity.

Notably police killed four Maoists at Borgora at an encounter on Wednesday. The deceased include top Maist leader Siddhartha Borgohain, while police commando Achinta Das received a bullet injury in his leg
The other three killed cadres have been identified as Rajib Gogoi, Arup Chetia and Kamala Burhagohain. Three AK47s, two grenades and a huge cache of ammunition have been recovered from their possession. A source said all three AK47s are among the four the Maoists snatched from police in Rajabari in Tinsukia district last year.

13 May 2017 - 11:44am | AT News
Police claimed to have achieved a major breakthrough in its probe into the GS Road robbery incident where gold ornaments worth Rs 21 crore were looted at gun point in full view of its employees and... 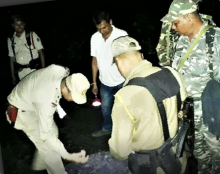 One injured in firing incident

10 Oct 2017 - 6:04pm | Ranjanjyoti Mahanta
In yet another incident of firing within a span of 24 hours, unidentified persons opened fire on a 34-year-old man at Barhampur area of Nagaon on Monday night. One Naba Sinha of Amoni was...