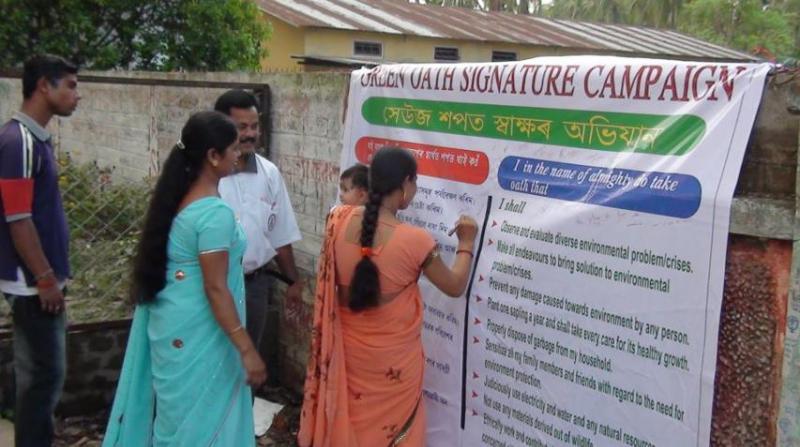 Celebrating World Earth Day 2012 with grassroots has deserve special mention. Aaranyak in association with Sankardev Sisu Niketon, Dadara celebrated World Earth Day 2012 on 22nd and 23rd April with villagers and school children in three adjoining villages Dadara, Pasaria and Singimari in style. Their decision to take out a candle light march on 22nd April evening was to mobilize mass support to save the planet on World Earth Day. However little did the locals of Dadara know, that their motive to encourage more people to work for conserving their surrounding complimented this year’s theme for Earth Day: Mobilise the Earth. “Green oath” signature campaign attracted mass villagers and they expressed their thought of protecting nature for future.

On 23rd April with continued event of “Green Oath” signature campaign, they conducted a drawing competition for school children of Dadara themed on “Mobilizing the Earth”. A mass rally was organized involving school children and local villagers who were spreading message of saving earth. Mr Paresh Das, Principal of Sankardev Sisu Niketon delivered a brief talk on “Green Oath” and under his guidance children villagers took the oath and took pledge.

Purnima Devi Barman an environmental educator and a wildlife Biologist of Aaranyak and a lecturer in Handique Girls College briefed the audience about the participation of Earth day and the history behind its celebration. Programme was followed by a few cultural programme like songs Of Dr. Bhupen Hazarika composed on the “Mother Earth” like ”O mor dharitri aai..saronote diba thai… in relation to earth day. Ecofriendly bags were distributed among villagers to initiate a ecofriendly habit amongst the participants. The programme was graced by the presence of Mr. Shyamal Dutta, Director Operation, Aaranyak and Mr. Manash Barthakur and Mr. Ajoy Kumar Das, senior member of the organisation. It is to be noted that Aaranyak has been extensively working on these three villages from last four years for protecting endangered bird Greater Adjutant as these villages specially Dadara is the hub of this world rarest species of Storks. With Continuous awareness Programe and environment education the villages have greeted this bird on this backyard and developed an “ownership feelings”, a most welcome development for conserving a globally endangered bird. Organizing such events in these villages not only boosted up their contribution but also enhances their knowledge on nature.

Assam agitation back with bang!

25 Sep 2015 - 12:45pm | AT New Delhi
A group of AGP ideologues are on a day long dharna in New Delhi on Friday demanding an immediate halt in the move to shelter the non Muslim Bangladeshi and Pakistani intruders.Led by AGP leader and...