Kumari and Jayanti start their day’s work at 4 am every morning. This is the only time these two women get to talk and discuss their problems, before the others arrive. Jayanti has been upset for the last few months. Her teenage daughter ran away with the boy in the next village. How could she have done that? Did she not think of the shame it would bring to the family? Did she not think of what repercussions it would have for her sister who was yet to be married or the difficulty her father would have now to raise a loan for the tractor? But Kumari was wise, she was a true friend. She tried hard to explain to Jayanti that the only way was to accept and forget; after all, 3 years ago her daughter had run away with someone too but with time life had return to routine comfort for her and her family.

While this family rejoices the return of normalcy, there are others, elsewhere who have stopped waiting for normalcy to return. Instead they have gone ahead and created a different normalcy for themselves, very different from what you and I understand.

Rashmi, a teenager on the brink of adulthood, likes music, jeans and Bolywood movies. She giggles while saying that, she is an ardent fan of Hrithik Roshan and doesn’t miss a single movie of his. But, Rashmi faces a daily cruel ordeal which she fervently prays no other human being or child faces. In any given day, she has to serve to 5-6 men - her clients. She is a commercial sex worker, operating from a house which has 7 other girls like her. Rashmi is seventeen years old; she was taken away from her village when she was only fourteen.

She has been going through this humiliation for the past 4 years, so much so, in a way, disheartening it may sound; she has started looking at it as a way of life. She has no shame, but only regret that she will never be able to go back home. She doesn’t have a home to go. She learnt that her parents stopped looking for after a few days thinking that she ran away on her own will. Rashmi, along with three other girls from her neighbourhood was kidnapped and then sold off to an aunty who runs couple of beauty and massage parlours in Delhi.

Every year, girls like Rashmi are reported missing, but in reality, they become victims of trafficking. After hearing her story, I was left wondering for days. How can human beings be sold off like commodities or cattle? Why the families never realised that their children might have been trafficked instead of leaving it at ‘missing’? What greed in a person compels him/her to sell or buy another human being? Have I been a perpetrator too?

What is truly shocking is that human trafficking is globally the most lucrative and profitable sector after drugs and trafficking in arms. According to ILO estimates (International Labour Organisation), this illicit industry generates as much as $32 billion in revenue each year.The trafficker needs no investment, all he heeds is to coax, coerce or dupe victims or the family into a promise full of lies.

Sometimes the vulnerabilities of an individual may also be the cause, apart from reasons such as poverty, gender biases, lack of employment, illiteracy, ethnic conflict and cultural acceptance of the practise by some community. I believe the problem is further compounded due to the growth in sex tourism, the entertainment industry, pornography in print, electronic and cyber media, changing public attitudes towards sex and morality.

What is human trafficking?

Trafficking of human beings, in any form, be it for sexual exploitation or forced labour, is the worst ever crime one can commit. To quote the United Nations Protocol to Prevent, Suppress and Punish Trafficking in Persons, especially Women and Children (one of three "Palermo Protocols"), defines trafficking in persons as: “The recruitment, transportation, transfer, harboring or receipt of persons, by means of threat or use of force or other forms of coercion, of abduction, of fraud, of deception, of the abuse of power or of a position of vulnerability or of the giving or receiving of payments or benefits to achieve the consent of a person having control over another person, for the purpose of exploitation. Exploitation shall include, at a minimum, the exploitation of the prostitution of others or other forms of sexual exploitation, forced labor or services, slavery or practices similar to slavery, servitude or the removal of organs.”
I also got to know that a new trafficking trend has emerged in India, where girls specially minors are sold off as sexual brides. There is a huge demand for these trafficked brides in states like Punjab and Haryana, owing to rampant female foeticide and gross gender imbalance. Girls as young as 11-years old are sold to to 45-year-old men for a pittance of few hundred rupees. They are raped and sexually abused for the purpose of bearing them sons.

Mr. Rishikant from Shakti Vahini (NGO working on anti-human trafficking) informs that in Mewat district (Haryana), on an average one can easily find 5-6 ‘sexual brides’ or ‘paros’ from Assam. The girls are of between 13-22 years and on an average, depending on their looks and behaviour, they are sold for Rs. 3,000 to 60,000 rupees. In most of the cases the marriage doesn’t take place at all. The ordeal doesn’t simply end here. If not sexually satisfying, the women are re-sold and passed over to different ‘owners’. Girls are trafficked from Assam, Tripura, Jharkhand, Chhattisgarh, Jharkhand, Bihar, Andhra Pradesh, Orissa and West Bengal, Kerala and Karnataka.

Be it for sexual exploitation, coerced labour or marriage-once trafficked, they are subjected to a life of humiliation and endless horror. Women trafficked for sexual exploitation end up in a vortex of sexual and physical abuse. What is even sad is that they don’t even have the ownership to their own income. The brothel ‘Medame’ and the pimps take more than 70 % of the share. They are not even in a position to meet with up with their daily sustenance .Access to basic health services and even the right to negotiate for condoms is like a distant dream for them. They also run the risk of being exposed to diseases such as tuberculosis, reproductive tract infections, sexually transmitted infections, including HIV.

It is not as if the situation is altogether bleak. With the efforts of agencies such as United Nations Office on Drugs & Crime, NGOs, Government machinery and the law enforcing agencies, victims are being rescued, rehabilitated and repatriated, and architects of this crime are being booked under the law. But I wonder if this is enough? As long as demand lives, supply will re-surface.

It is time that we as concerned citizens raise our collective voices and encourage action against the perpetrators-clients, madame, pimps, traffickers and all those people who encourage this crime.

Every individual needs to be informed .Every individual needs to spread awareness so that the motives of the traffickers can be thwarted. Parents need to be vigilant on the online sites the child visits and prevent online predators from communicating with them. Also, the society at large, instead of ostracising the survivors and victims, needs to encourage rehabilitation and re-integration of the survived and rescued victims. We need to restore their dignity, support them in overcoming their scars and give them the respect they deserve and which has been overdue for long.
In India

* Some of the materials have been reproduced from the document ‘Media Kit by TAHA –UNDP.
* Names changed.

Permalink Submitted by thomas alex on Thu, 29/11/2007 - 07:47
traficking in human beings is the worst possible crime. even the most advanced societies have not been able to find a way to eliminate this evil from society. according tome the main reasons for this social malise is the prejudice that societies , religions and politics have towards women. from time immeorial women has been subjugated to the worst cruelities in all religions . even in politics women have been, and is still not been given there rightul place even in the united states the right to vote was given to women only in the early 20th century. even now women do not exist in fedual islamic societies except for procreation and fulfilling the carnal desires of men. only by empowering women in all walks of life can this evil be rooted out. when we can think of having a women pope, awoman president of the u.s , women maulavis and allowing women to offer prayers in mosques along wit men, a woman shankaracharya, only then can we have a society devoid of such evils.

Permalink Submitted by bhushan bhagat on Sat, 19/01/2008 - 17:44
I want to information about traffickings in Jharkhand 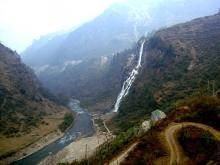 3 Aug 2011 - 6:10pm | editor
The Electronic Media Forum Assam (EMFA) has expressed its concern over the ongoing controversy on a social networking site (SNS) and its implications on media persons as a whole in the State. Some...