Two policemen were injured when ULFA militants triggered a powerful grenade at Doomdooma in Tinsukia district on Saturday.

The incident took place when a group of security personnel went to Doomdooma market at night and found a suspicious packet at a vegetable shop. The beg exploded with a huge sound when the policemen were inspecting the packet. They were identified as Anil Nath and Prabodh Sonowal. Meanwhile, in an e-mail to the media, ULFA anti-talk faction's publicity department member Joy Asom claimed responsibility for the bomb blast. 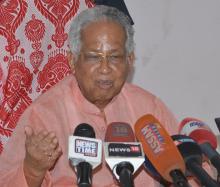 17 Aug 2017 - 3:19pm | AT News Guwahati
Senior Congress leader and former Assam chief minister Tarun Gogoi blamed it all on the Centre for the ravaging flood fury that wreaks huge havoc in the state where at least 30 people were killed....

Illegal coal trade still on in Margherita! How?

28 Feb 2009 - 3:39am | shariefzamanborah
The Sonari unit of Assam Jatiyatabadi Yuva Chatra Parishad (AJYCP) today burnt the effigy of State Forest Minister Rockybul Hussain in protest of brutally killing of a pragnent elephant and its tasks...