From our correspondent at Dhemaji: In another incident this evening in the Assam-Arunachal Pradesh border, near Dhemaji, a surgent major of ULFA Rajib Baruah @ Albert Gohain was killed in an encounter with Army. 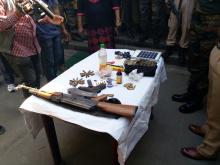 7 Jun 2013 - 9:33pm | AT News
Normal life in Assam remains crippled on fourth day following an indefinite economic blockade imposed against Nagaland.The blockade was imposed after armed miscreants killed a farmer during a firing...