The Purbnchal Tai Sahitya Sabha central committee had a meet on March 8 at Demow with delegate. Pronab Gogoi of Margherita has been elected as President and Atul Phukan of Sivasagar as General Secretery. More then 150 deligates attended the meet. 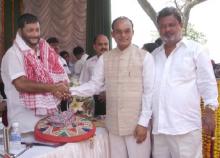 AGP sure of victory in next Assembly polls

10 Apr 2008 - 4:35am | editor
The Opposition Asom Gana Parishad president Brindabon Goswami has alleged that several AGP workers elected in the panchayat polls have yet to be issed certificate only at the instance of the ruling...

12 Apr 2015 - 11:04am | AT News
The Karbi Anglong district administration steps up probe into the recent three rape allegations in Dokmoka area. Simultaneous probes are also in progress by police and the army in this connection....