Two more persons died allegedly because of starvation in a tea garden in Cachar district. The two workers have died at Bhuvan Valley tea garden on February 18 and February 22. This was what the Barak Human Rights Protection Committee alleged on Friday.

Notably, the garden was closed for four months from October 8, 2011 to February 8, 2012 and the labourers did not receive any wages which led to the starvation deaths of eighteen workers.

Notably, the toll in the garden allegedly due to starvation rose to 12 in the garden during the last six months. The garden re-opened on February 9. But its authorities have still not taken any positive actions Bin terms of providing urgent medical and food support.

BHRPC team met 43 sick people on February 9 in the three divisions of the garden who were in need of urgent medical and nutritional support. 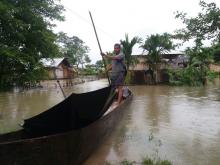