India as a largest democracy in the globe may be a prime source of inspiration for many other nations, but the country is itself facing crisis in many fronts. The deepen crisis of governance & administration, regional imbalance, strain in Centre-State relationship, unabated corruption, and Indian civil society with a blur vision only show the symptom of the calamity we are waiting for, said Dr BB Dutta, former Rajya Sabha Member, while addressing a distinguished gathering at Calcutta High Court auditorium today morning. He was delivering the welcome address in a seminar cum workshop on ‘Urgency of Reform in the Indian Political System: Revisiting the Constitution’ at Kolkata, where hundreds of illustrious personalities from different sections of Indian society have rubbed their soldiers. Organized by the Calcutta High Court Bar Association in association with Divya Jeevan Foundation, the seminars is also addressed by
Justice Kalyan J. Sengupta, Justice JS Verma, Himangshu Dey with many others. The day long seminar is also attended by SC Jamir, former Goa
Governor and Nagaland chief minister, Manas Choudhury, MLA from Meghalaya, BK Nath, proprietor of Jugasankha Publications, Guwahati
with some northeast India based journalists.

Making his point clear at the seminar Dr Dutta, also the chairman of Divya Jeevan Foundation, highlighted the need of continued dialogues for a better India. He also clarified that the exercise is for educating Indian themselves, but no way designed to malign any political party or leaders in the country. Dr Subhash C. Kashyap, a constitutional expert insisted that there is an urgent need of political reform in India as the a partial colonial model of constitution was adopted after India’s independence. He also cited that excessive power at New Delhi (we call it as centre) has created tremendous problems in governance. Dr Kashyap also argued that if the sovereignty belongs to the people, they should be allowed to be governed by themselves (without unnecessary interference from the Union government in New Delhi), because the political power must return to the people.

6 Dec 2010 - 8:22pm | Mubina Akhtar
Women of Assam weave dreams in their looms... We very often echo Gandhiji’s famous line when we talk of our age-old, indigenous silk fabric of Assam. The golden thread, which is one of the strongest... 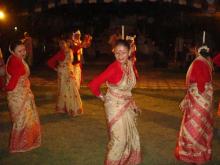