Security forces step up their offensive against NSCN militants who are unleashing a string of violence in Dima Hasao district. The militant of the Naga insurgent outfits have been arrested in on Monday.

The NSCN militants were arrested during a combing operation in Lodi areas in the morning. Four AK-47 rifles have been seized from their possession along with eight magazines and 515 rounds of live bullets. They were identified as Keisibng Zemi and Senglovi wazmi. Keishing was involved in the abduction and killing in Umrangsu.

29 Sep 2008 - 5:41am | Nava Thakuria
On the occasion of World Heart Day, the Cardiological Society of India ( North East Chapter) in association with theGuwahati Press Club had organised a heart check up camp on September 28, 2008 at...

29 Nov 2015 - 11:16am | Shajid Khan
A herd of 4 to 5 wild elephants damaged railway quarter walls and created a havoc in the entire  Pujakhola Tiniali area in  Tangla on Saturdy at about 1.55 am. The elephants also... 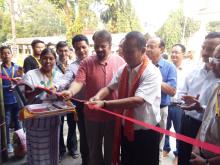