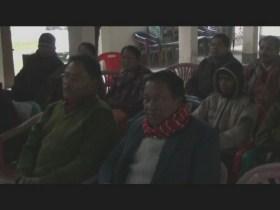 Like the other parts our state, the Silpi Divas, in memory of Death day of Rupkonwer Jyoti Prasad Agarwalla, also organised at Simoluguri of Sivasagar district on Tuesday. The day long programme is organised by NGO Udiyomaan and Simoluguri unit of Assam Sahitya Sabha.

On this occasion, fine-art and Jyoti sangeet competition is held among the students. In the open session a discussion, “ The ideal of Jyotiprasad among new generation” is held. Which is inaugurated by Juga Gogoi, the secretary of Sivasagar district Sahitya Sabha. In which, Md. Mohsin, retired lecturer of Nandanath Saikia merorial college, Titabor, Debobrata Saikia, MLA, Nazira and Durlov Buragohain, Principal, Siu-Ka-Pha Academy present as asserted speaker and special guests respectively. Umanath Sarma, Ex. Lecturer of Gorgaon college presided the discussion.

27 Aug 2010 - 11:20pm | Anup Biswas
Conscious citizen of the Diama Hasao district appealed to all the Political leaders, Intellectuals and bonafied citizens of the district not to allow any outside agent from any organization to...