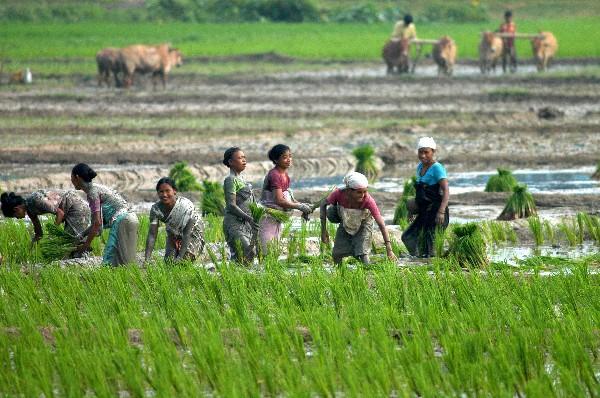 After the floods comes the pests. Farmers in upper Assam districts are at a fix as to how to combat the growing menace of pests that already had eaten a huge chunk of the paddy. The insects have invaded the paddy fields at the time of flowering and the helpless farmers are facing a huge crop loss. No remedy is at sight as the pesticides that are being sprayed fails to bring any result. According to reports about 2000 acres cultivation are destroyed by pests in Golaghat district alone. Though the growth of Agriculture and allied sector is projected at 6.6 per cent in 2010-11 by the state government it is feared that the estimated amount may not be achived due to crop damaged by pest and insects.

This season the growth in the number of pests has become a worry not with the farmers alone but with the agriculture department also. They term the problem as really unprecedented. According to a study done Asomiya Pratidin the reason behind this is destruction local ecosystem as well as the chain link among plants and animals due to rampant tree felling and uses of pesticides. Usually birds, frogs and reptiles survive on pests and insects but their numbers have shrunk now. The number is 75 percent lower than what it was 20 years ago. The bird population decreased due to loss of forest areas. Tall trees are becoming rare. Many of the birds that used to build nests in tall and big trees are almost on the verge of extinction. Similarly, most of the bamboo grooves are gone now. Large-scale destruction of reserve forests, personal and community forests and bamboo plantation have influenced the mating of many bird species. For example, the herons and storks.

The indiscriminate use of chemicals in tea garden and crop cultivation is the culprit for declining population of frog to 80 per cent less than two decades ago it had. Bird who control the increase of insects and pest have lost their habitate due to lack of trees and bamboo plantation where specially flocks of egrets (Bogolee) used to live and nesting. There is no sufficient bettle nut, palm trees and straw hut for bird like tailor bird, munia and arge-sahouse sparrow. The increasing number of tea garden where toxic chemicals becomes inevitable appears as athreat to rice cultivation. The breeding of the egrets is closely related to the timing of cultivation. The peak breeding season is from March to August. In Assam, rice transplanting starts in June and July. During this period, the local birds feed their chicks with the caterpillar or larvae of the insect pests.

One is the cattle egret, traditionally protected by farmers for their help in protecting farm fields from harmful insects. There are more than 25 species of beneficial local birds in the agricultural fields of Assam like common myna, house magpie, egret, heron etc. Cattle egrets, for instance, known locally as Goobog, can eat more than 400 insect larvae an hour at ploughing time. But the egrets, which nest in bamboo groves near farmers’ homes, are increasingly seeing their nests washed away by increasingly heavy rains that now fall at nesting time. Now, because of climate change, there is (early) rain during the breeding season.

Apart from habitat lost widespread use of pesticide and chemical in paddy field and tea gardens. The chemical mixed toxic water and food as well as residue have been putting frog and bird to death and diseases for decades and the rate increased in last fifteen years. On account of presence pesticide through food birds becomes unable to incubate their eggs. The shell of eggs becomes thinner and weaker. So as the birds sits over eggs to incubate they brake. A large number of birds died on account of poisonous pesticides mixed food and some are suffering from diseases and ultimately put into death. But these days the decline in the bird population has increased the insect population thereby increasing crop damage.

29 Jul 2008 - 12:36pm | editor
The over all flood situation in Assam remains critical with the flood waters of the mighty Brahmaputra and its tributaries are spilling into some more areas. Lakhs of people marooned after the breach...