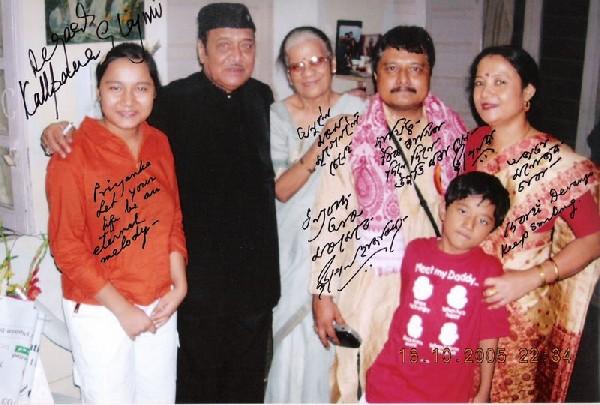 At any mention of the syllables “Bhupen Hazarika”... a very vivid image of howling winds gushing over turbulent Brahmaputra waters under, starkly contrasting, a calm azure sky... fills the canvas of my mind.

I am, what Temple Grandin would call, a visual thinker. I think in pictures... in bright overwhelming images. To me, “Bhupenda”, as he is fondly called by my parents and their peers, is a lyricist of the highest calibre. I have often felt that he and I, we have one thing in common – the love of creative expression. He has a gift – he can conjure dramatic images out of words and evoke their movement in our imaginations through his music. He works through sounds, and I, through colour... His transcendental harmonies harmonize with my mind, and I can instantly connect with them, whenever I hear them.

I have personally met him perhaps a few times in my life so far. However, I remember clearly one occasion a few years ago when he had come to perform, in fact, to mesmerize the city of Delhi, at Siri Fort auditorium, on the request of Assam Association, Delhi. It was a famous event in the history of the Association and tales of it have been widely broadcast. People have described how genial his mannerisms are, wondered in awe how he sang while standing next to his harmonium for hours at his age and health, and expressed how much they were moved by his voice, as emotional as it was melodious. I testify to all of it. Here is a man who is so astoundingly passionate about his music and enraptured by the beauty that sounds could create. Truly, it was not a concert but tryst with the universe of symphonies, a taste of life in the angels’ courts.

My parents had played an important role in the organisation of the event and my family visited him late after the show was over. He was very gracious, very benign and seemed to love children (he seemed very excited to see me and my brother and very indulgently showered us with blessings and sweets). His health too, as I remember it, was excellent. He had pink cheeks like a little girl and rosy, soft hands that held my hands in a gentle grasp.

Now, being a purebred city brat, I cannot honestly say that I have grown up listening to his songs on my fancy electronic mp3 gadgets. However, his tunes have been part of my life all along. My father keeps humming them on random occasions, for example, while driving or while in the bathroom. My parents even used them as lullabies for us. Many of his tunes, like ‘Bistirno Parore...’, ‘Buku hom hom kore...’, ‘Manuhe manuhor baabe...’ and other timeless compositions have been embedded to my memory, almost by default. Also, I do have a playlist containing hundreds of his songs that I hear occasionally when I’m in search of an inspiration.

I cannot claim either that I understand all of the eloquent Assamese words he uses in his compositions, but that is what amplifies the wondrous beauty of his music – regardless of whether I understand the words themselves, his evocative tunes are explicative enough that I could still conjure an accurate imagery. I’m sure a lot of other people also share this experience.

Bhupen Hazarika is a phenomenon, and if I may say so, “really awesome ”. He has no doubt been an inspiration for numerous music artists and a role model. From what I have gathered, not only has he an international audience, he is also multitalented with a wide range of interests encompassing even cinema. Many worship him and very few can criticize him (I personally haven’t met any). On a personal note I feel he deserves a more educative page dedicated to him on Wikipedia.

All in all, he is indeed one of the legends Assamese soil has sprouted and has truly earned the title of “music maestro”.

20 Jul 2014 - 10:18pm | AT News
Top ranked police and civil officials decided to firmly deal with the illegal settlers in Doldoli reserved forest following the incidents of firing by the Naga miscreants . DIG-Border,...