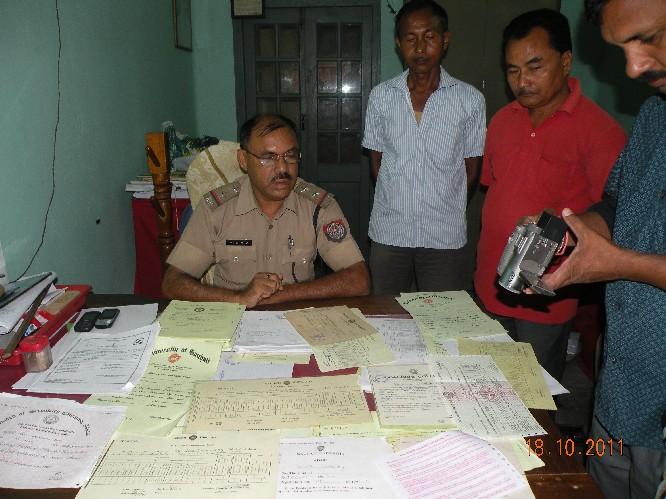 In a major breakthrough Kalaigaon police arrested three members of an interstate fake mark sheet and certificate racket at Kalaigaon on October 18 recently. Police recovered more than a dozen seals of various educational institutions including Guwahati University, SEBA, AHSEC, government hospitals etc. The racket had been operating at various places in Assam and Arunachal Pradesh for several years supplying fake mark sheets and pass certificates of BA,BSc, BCom of GU;SEBA;AHSEC;Third Eye College, Guwahati to people in return of huge amount of money. They had also been issuing birth certificates to any people including Bangladeshi nationals posing serious threat to ethnic population of Assam and NE.

The incident came to light on October 17 when Karim Ali and Jamina Khatun, residents of Kalaigaon had approached Dr.CP Payeng,Medical and Health Officer of Kalaigaon State Dispensary for attestation of xeroxed copies of birth certificates of their son Pasan Ali and daughter-in-law Nurbanu Begum respectively. To his utter surprise,Dr.Payeng noticed that his signature had been forged in the original birth certificate.He immediately reported the matter to Kalaigaon police station resulting arrest of one Mizul Ali (27) owner of a mobile phone shop owner and son of late Siraj Ali of Kalaigaon. Police headed by Habibar Rahman,OC,Kalaigaon PS arrested two more members of the racket namely- Dominique Daimari (50)of Domaruguri and Nirmal Basumatari (52) of Dhopguri on October 17 and 18 respectively. Police also recovered dozens of official rubber seals of various heads of institutions of Assam and Arunachal Pradesh namely -Controller of Examinations of GU, SEBA, AHSEC; Third Eye College ,Guwahati;Registrar of GU;Principals and Head Masters of Mazbat HSS,Khalagtang HSS of Arunachal Pradesh;Gohpur HS;Tangla College; Tangla HSS; Chengapara HS,Medical and Health Officers of Kalaigaon and Kabirali State Dispensary.

Fake and original certificates/mark sheets of MA, MSc, BA, BSc of GU;HSLC of SEBA,HSSLC of AHSEC;birth certificates etc were also recovered in huge quantities from the possession of the trio. The arrested persons confessed to have sold such certificates at an amount of rupees three hundred onward. They also said that many people had already been employed in various government jobs.Thaneswar Malakar,DC,Udalguri has directed the police to take strict action against such rackets operating in the district.

24 Dec 2014 - 4:55pm | AT News
The Assam government has confirmed that the death toll in the serial NDFB-S serial attacks in Sonitpur, Kokrajhar and Chirang districts has gone up to 68.   According to chief minister...

29 Aug 2011 - 11:28pm | Jayanta Kumar Das
Sensation prevailed at Kahibari under Udalguri PS yesterday night on August 28 at about 2.40 am in front of the residence of Rihon Daimari, former PHE minister of Assam and presently, MLA of...