One person was killed and ten others have been injured when they were struck by thunderbolt in Assam. The incident took place in Barpeta district on Wednesday. The deceased was identified as Majnur Hussain and ten others injured when they were struck by thunderbolt at Kujharpita under Barpeta police station. All they were travelling in a jute loaded vehicle when the incident happened. The injured people are undergoing treatment at the Howly Civil Hospital.

9 Jan 2018 - 8:49pm | AT Kokrajhar Bureau
Kokrajhar, Jan 9: President of the All Bodo Student's Union (ABSU)  Promod Boro coming down heavily on BTC chief Hagrama Mohilary over his remarks on ABSU working to the community welfare... 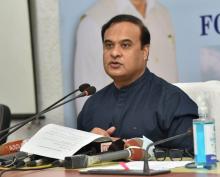 14 Sep 2020 - 4:34pm | AT News
Guwahati: AJP is born against Congress, BJP and AIUDF. But these parties are least bothered. BJP leader Himanta Biswa Sarma said each of the AJP candidates will have to remain satisfied with maximum...