Irate villagers of Dharmajuli village near Suklai ransacked the office of the Bornadi Wildlife Sanctuary on September 4,causing damage to its property. According to information,a lone wild elephant roaming in the locality damaged three houses in the Dharmajuli village the previous night.The wild elephant had been creating trouble in Nagrijuli TE for some days before it was chased away to Suklai area by Nagrijuli TE authority.The incident occurred just 4 KM away from the Range office of BWLS. Range Officer,Satya Boro along with his staff visited the spot in the morning of September 4 for investigation and assessment of the damages.At around 10 AM,a group of fifty numbers of people mostly woman marched towards the Bornadi WLS Range Office.The Range Officer was not present there while the unruly mob started breaking furnitures of the office.They also pelted stones at other houses.”PIGMY HOG”,a local NGO immediately informed higher forest officials and police from Dimakuchi Police Station arrived at the scene at 11 AM and the situation was brought under control.
In another tragic incident,dead body of one 7 years old male wild elephant was found in Dangalbasti village near Ghagra TE Division,Hatigarh in the morning of September 5.The 5.6 feet tall elephant's body bore no marks of injury.Eye witnesses remarked it as case of poisoning. Recovery of this dead wild elephant raises the death toll to 6 in last three months in the district. It needs mention that 6 numbers of people have already lost their lives during the three months period in the district. If BTC and Assam government neglect the situation more deaths of wild elephant would occur,said a nature loving people of Hatigarh. 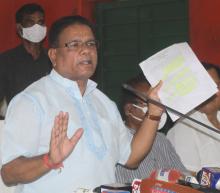 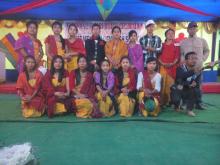 4 Feb 2016 - 9:05am | Gwshad Basumatary
The two-day long silver jubilee celebration of Bessie Memorial English School (BMES) of Kokrajhar came to an end on Monday. According to the schedule, the programme started around 7.30 AM with the...