The DMA extends its thanks and gratitude to the State Government of Assam, and the Central Government including the interlocutor Shri P. C. Haldar for granting an interim release order from jail to DHD (J) leaders to enable them to participate in the formal talk in the interest of peace and development in Dima Hasao District of Assam.

The DMA wishes for a meaningful peace dialogue between the DHD (J) leaders on the one hand and the Government of Assam and the Central Government on the other hand..

The DMA Appeal to the Government of Assam and the Centre to release all the civil and political leaders namely, Shri Mohet Hojai Ex. C.E.M and Shri Golon Daolagupu Ex. E. M. of Dima Hasao Autonomous Council, Shri Partho Warisa, Shri Sameer Ahmed and Shri Pojen Hojai on Humanitarian ground. So that no further troubles occurs in the peace loving District. 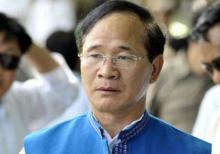 Tuki back as Arunachal Pradesh CM

20 May 2012 - 1:13am | editor
The All Arunachal Pradesh Students’ Union on Saturday demanded steps to resolve the decade old inter-state boundary problem with Assam. Addressing a press conference in Itanagar, AAPSU...