Other than the Chief Guest for the conference - Pu Laltlansang Hmar, EM and Pu Lalthangzuol Joute, MAC, many other eminent persons in the region attended the conference. Meriterious award was also conferred to 80 achievers among the community. Election of leaders for the term 2011-2013 was also held under the observation of Simon L. Infimate, Jt. Secy, HSA General Hqrs.

7 Mar 2009 - 7:22pm | editor
The Asom United Democratic Front, NCP, CPI, CPM leaders are holding a crucial meeting in the city of Guwahati on Saturday to finalise the seat sharing deal for the upcoming Lok Sabha poll in Assam...

7 Apr 2012 - 3:19am | editor
Tension prevails in Gossaigaon following a shoot out leaving a local businessman injured. The incident took place at around 7-30 in the evening at Charaibeel when he was trying to escape from a... 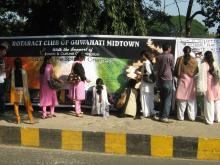 1 Dec 2009 - 5:54pm | Mayank
On November 26, our country witnessed the biggest terrorist attack ever planned on the Indian soil. Hundreds of innocent people including the policeman and the armyman lost their life on that unholy...