The Assam Government has announced judicial probe into the Dispur firing clash where 3 persons including a minor boy lost their lives. The announcement came from Chief Minister Tarun Gogoi who is expected to receive the Surajeet Mitra’s enquiry report on Monday. According to information, a panel of a retired high court judge would probe the entire incident where a section of KMSS –protesters turned violent as they were holding a rally in Dispur last gate on June 22. Initially, the government asked additional chief secretary Surajeet Mitra to probe the incident which is set to submit the report on Monday. 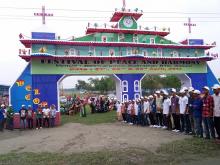 Festival of peace and harmony begins

22 Apr 2017 - 11:22am | AT Kokrajhar Bureau
A three day colorful programme scheduled of the festival of peace and harmony has been kicked off from on Friday at Beswargaon village in Kokrajhar district.  Over 10,000 delegate and 50,000...

No halt in rhino poaching

4 Aug 2016 - 2:32pm | AT News
Poaching refuses die down in the flooded Kaziranga National Park where 3 rhinos were killed for horns during the last 24 hours. That too in the presence of forest minister Pramila Rani Brahma, who...