Poisonous Arsenic have been founded in the ground lavel water of Sivasagar and Nazira sub-division which is a threat to the Public Health of the District.

25 spots have been identified as Arsenic polluted area in Sivasagar District. A large numbers of people of the Desang valley area are highly effected. The concerned department has so far not taken any preventive measures till now.

According to the sources, the Public Health and Engineering Department (PHE), Nazira, with the help of the UNICEF, the PHED Nazira conducted a sample test of Arsenic in the ground level water of Nazira sub-division and after testing the colleted sample a large quantity of Arsenic. At a dip-tub-well of Hatikhula at Bihubor and the same was immediately sealed by the authorities.

Now the PHED is going to conduct a sample test of ground level water in twenty gaon panchayats.

It may be noted that above 4% quantity of arsenic is dangerous for human life. People of the Sivasagar District want urgent preventive measures in this regard by the appropriate authorities. 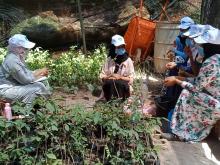 7 May 2021 - 3:48am | Funmi Aiyegbusi
Looking through my grandfather's diary 25 years after his death, I got some insights into the life of a farmer. Although he had three farms which would have...