To celebrate the 150th Birth Anniversary of Gurudev Rabindra Nath Tagore at Rangaloo, Nagaon in a befitting manner, Jana Sikshan Sansthan, Nagaon in association with its parent organisation Gram Vikas Parishad organized a day long programme at Rangaloo on May 7. The day long Programme started with the national anthem ‘Jana Gana Mana performed ‘ by the Anganwadi Trainees and staff at 8:00am in the morning. Drawing competition, Rabindra Sangeet and recitation of Tagore’s poem competition was also held in this occasion. An open session was also arranged in the G.V.P 's auditorium where eminent and senior social activists Eliza Ahmed, Suraiya Begum, Laily Hussain were invited as chief guest. Sirajuddin Ahmed, General Secretary G.V. P. anchored the open session where Dipak Das, subject teacher of Christ Jyoti School delivered his lecture as the guest speaker of the session . Based Ali, Asstt.teacher, Rangaloo High School, Satyandra Ch. Das, Social Worker, Aswini Kr. Paul, Asstt. teacher, Raqngaloo High School were among the other speakers who participated in the programme. A power point slide presentation namely ‘KABI PRANAM’ depicting some of the important phases of Tagore’s life and achievements was one of the main attractions of the day .Successful competitors of the competitions held were rewarded with certificates and books. Momtaz Khanam ,Director in-charge,J.S.S.Nagaon who was present , delivered her speech . Sirajuddin Ahmed , General Secretary ,Gram Vikas Parishad ,Rangaloo thanked all the distinguish guest and general audience present in the open session as well as in the day long programme at the conclusion of the day long programme. 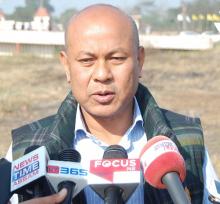 21 Jan 2015 - 11:45am | Hantigiri Narzary
The Chief of BTC Hagrama Mohilary who is also the president of Bodoland People’s Front (BPF) today said that his party will give chance to new faces in the forthcoming 3rd elections to BTC to be held...

16 Sep 2013 - 3:37pm | AT News
Yet another rape incident has shocked Assam. The gruesome incident took place in Karbi Anglong district where the victim is an 11-year old girl. The minor girl was raped by a neighbor before being...
Follow @Assam Times