Commalder Khaling of United Minority Liberation Army (UMLA) recently talks to Indian Unheard. In this exclusive interview, the UMLA leader tells on camera his outfit’s goals, visions and strategies. The UMLA is one of the 17 armed member groups of the Kuki National Organization – an umbrella organization leading an armed struggle against Manipur government for a separate state within the Indian constitution.

The UMLA, alongside other Kuki militant groups, has recently signed a tripartite suspension of armed operations with the state government and the Centre. The militants are now pressing for a political dialogue with New Delhi over its demand for the statehood. Khaling is regarded as a critical force for making the talks a success. 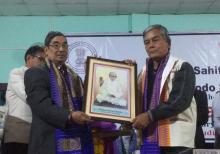 17 Sep 2013 - 9:12pm | AT News
Garo National Liberation Army militants killed three people including a women along the Assam-Meghalaya border on Tuesday.The incident occurred when a group of five armed militants stormed the...