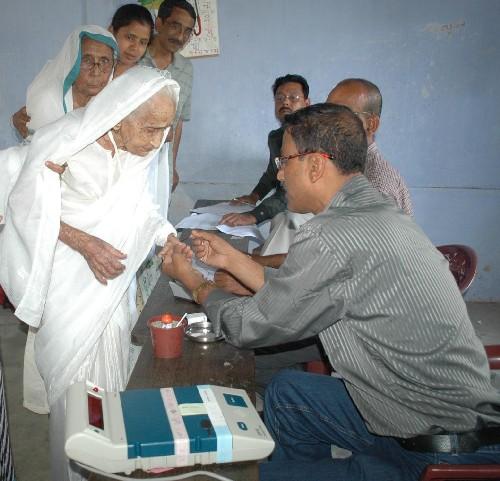 Over 85 per cent voters excercised thier franchize in the first phase of assembly polls in 62 constituencies covering 13 districts on Monday. Amid a mammoth security arrangement, polling began at 7 in the morning in over 11,000 booths which ended as soon as the clock struck at 3 in the afternoon.

The fate of 485 candidates have been sealed in the electronic voting machies. Of these, 38 are women nominees. The polling was by and large peaceful.

Polling was delayed in several places because of some technical snags problems in the electronic voting machines. Congress and the BJP have fielded 62 candidates each in this phase. AGP has 51 candidates this time including former president Brindabon Goswami, former transport minister Pradeep Hazarika and party general secretary Atul Bora. BJP state president Ranjeet Dutta and fire brand Prasanta Phukan are among the heavyweights whose fate have been sealed in EVMs. Chief Minister Tarun Gogoi, former transport minister Anjan Dutta, PWD minister Ajanta Neog, power minister Pradyut Bordoloi, Assembly Speaker Tanka Bahadur Rai, water resources minister Prithvi Majhi are among the Congress leaders who are seeking mandate this time again. There are 157 independent candidates in the fray for the first phase.

The ULFA leaders now in the peace process have not excercised their franchise as they have announced earlier. Moreover two former ULFA rebels are also seeking fresh mandate this time. they are Kushal Duwari from Thowra in Sivasagar district and Jiten Gogoi from Bokakhat in Golaghat district.

For the first time, KLNLF rebels operating in Karbi Anglong district participated in the democratic process by casting their vote on Monday. A total of 9.6 million voters in the second phase elections April 11 in 64 seats would decide the fate of 496 candidates. Results would be anniunced on May 13.

23 Feb 2017 - 6:49pm | AT Staff Reporter
Finally the helpless leopard was killed at Boscobari village in Udalguri district.The leopard which had been encircled from all sides at Boscobari in Udalguri last night finally succumbed to its...

Chetia brought back to Delhi

11 Nov 2015 - 2:07pm | AT News
In a major move to rejuvenate the ULFA peace process the Centre has brought back Anup Chetia from Bangladesh on Wednesday. A CBI has arrived in New Delhi along with Chetia and his close associate a...

Sigh of relief for Mazbat people

2 Feb 2018 - 12:22pm | AT News
UDALGURI: Thousands of people in Udalguri seem to have heaved a sigh of relief when Mazbat MLA,Charan Boro launched the Chief Minister's Free Diagnostic Services Programme in Orang CHC at a function...