Constituted with more than 30 lac people the Goria, Moria, Desi communities who represent the indigenous Muslim bulk of Assam consider themselves deprived and neglected by the successors of Dispur. Expressing this in a Press Conference at Bhagawati Prasad Barua Bhavan today the All Assam Goria Moria Desi Jatiya Parishad (AAGMDJP) said that in the days gone by the Congress Government in power have failed to implement steps for the overall development of more than 90% of the converted indigenous communities who constitute the indigenous Muslim mass of Assam. It was held that despite their indigenouity the Goria, Moria and Desi communities categorically appear to have been taken for granted because of their adherence to Islâm and that most demands including the formation of a Development Parishad proposed to the Congress led Government by the AAGMDJP have in time fallen to deaf ears.

Development Parishads have been declared for populations who came to inhabit Assam before and after the Indian Independence but in spite their pre-existence in Assam for thousands of years, no Development Parishads have been justifiably declared for the uplift of the Goria and Desi communities. The Congress Government has eventually exhibited a lackadaisical attitude and resorted to communalism resented Hafizul Ahmed, General Secretary AAGMDJP.

He questioned: "To address the concerns of more than 30 lac indigenous Muslims of Assam, how many Gorias and Morias were offered candidature by the past Congress Government?" The Bharatiya Janata Party which is alleged to be communal by the Congress on the other hand has offered candidature to an indigenous Muslim in Upper Assam this time. Whereas, the BPPF led Congress Government have proved itself otherwise by accommodating no one from the Goria-Moria-Desi communities he echoed.

According to the 2001 Census 4.25 lac indigenous Muslims inhabited Kamrup District and more than 3.5 lacs inhabited Darrang District. In these two districts no indigenous Muslims capable of representing the Goria-Moria-Desi communities has been offered candidature by the Congress Government. Confirming Ms. Jibontara Ghatwar’s candidature in view of her communal statement that she does not require Muslim votes, Hafizul Ahmed questioned as to whom the Congress Government has proved communal; Ms. Jibontara Ghatwar or the tendencies of the Congress Party itself?

Taking into consideration the interest of all the indigenous tribes and communities of Assam the National Citizens’ Register is yet far from being updated he reiterated. In the same breath he said that no steps were taken up to erect memorials in the name of indigenous Muslims who contributed to shape and define Assam’s struggle, politics and culture. Much incongruous is the fact that the Acquired Makam at Hajo – a sign of communal harmony has been dropped from the list of the 5 Religious Pilgrimage Sites of Assam.

The AAGMDJP in the forthcoming elections has called out to the indigenous Muslims to outdo what they term as Congress Conspiracy by whole heartedly supporting indigenous Muslim candidates no matter which ever political party they have been given candidature from to largely help benefit the indigenous communities. Boycotting Congress for their pronounced failure is only but natural concluded Hafizul Ahmed.

28 Nov 2015 - 6:56pm | Shalini Borgohain
Mistakes after mistakes by Amit Shah in his speech in Dibrugarh rally left state leaders red faced on Friday. But who will tell the BJP president to be correct? According to grapevine, Shah have... 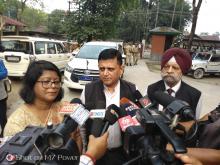 19 Nov 2019 - 10:16pm | AT Kokrajhar Bureau
KOKRAJHAR: An eight-member delegation of  a special review committee on detention center, led by chairman Debojit Mukherjee visited the detention center in Kokrajhar on Tuesday. The...