Assam bleeds again. Bombs and bullets threatens to bury the hope of peace in the poll bound state. After a brief silence, the anti-talk faction of NDFB and ULFA roared again. Eight BSF personnel were killed and 5 Congress men have been injured in two seperate strike by the banned insurgent outfit on Monday.

At least eight BSF personnel were killed and the same number injured on Monday in an ambush by the anti-talk faction of National Democratic Front of Bodoland in Kokrajhar district. Th e Bodo outfit used automatic weapons to ambush the convoy of the BSF in remote Ultapani forest area near the Indo-Bhutan border.

The BSF jawans were killed on the spot, five others succumbed to their injuries on way to hospital. Some of the eight injured jawans were rushed to the Hospital at Bongaigaon, while others were taken to Kokrajhar civil hospital for treatment. The deceased have been identified as Bijoy Kumar, S K Sharma, Arabinda Dere, Bolaram Lamba, Santa Ramthree, Naresh Kumar, Kuber Bora and Hira Singh.

A combing operation have been launched by the security forces, including the Army along the Indo-Bhutan border, to nab the culprits. The patrol was on way from Bangladoba in Chirang district of Assam to Ultapani in Kokrajhar when it was ambushed.

Hours after this attack, ULFA lobbed a powerful EID at the Rajiv Bhawan in Guwahati leaving 5 perosns injured. The incident took place at around 6-55 in the evening with a huge sound when party spokesman Mehdi Alom Bora was sitting at his chamber. Kalyan Gogoi, Akhsyay Rajkhowa and Ranjan Bora were also left injured in the blast. Mehdi Alom Bora’s condition is critical who is undergoing treatment at the Guwahati Medical College Hospital.

Assam Chief Minister Tarun Gogoi, who arrived in Guwahati from Delhi rushed to the GMCH immediately after the incident and visited the injured persons. Gogoi also visited the incident spot and instructed the district administration to firmly deal with the situation. Several other political parties also have criticized the banned insurgent outfit for the blast.

Meanwhile, ULFA has claimed the responsibilities of the blast and threatened to continue these attack. In an e-mail statement sent to media, Commander in Chief Paresh Baruah said that this attach is simply a message to Congress. The blast took place a day after the ruling party announced the names of 118 candidates for the upcoming Assembly polls.

It may be noted that ULFA threatened to target the Congress parties in rank and file for splitting the outfit. But the government downplayed the threat.

Permalink Submitted by Jeet Sarma on Wed, 16/03/2011 - 02:28
Internal Rumors had it that the Top Level CONGRESS leaders paid some ULFA Cadets to Carry out few Blast against their Own Party Workers. The Main Motive behind such Cunning Act is to Gain People's Sympathy for the Congress. That's what is Called INCREDIBLE but FILTHY POLITICS. SHAME ON YOU CONGRESS!!

B’deshi onslaught: where is UN

18 Jul 2015 - 1:33pm | AT News
The Assam Sanmilita Mahasangha demands UN intervention on the rights of indigenous people against the possible onslaught of the Bangladeshi immigrants.In a recent memorandum to the United Nations...

27 Oct 2013 - 3:00pm | AT News
The opposition Asom Gana Parishad has given a 12 hour bandh call on Monday in protest against the Congress government's failure to deal with price rise and law and order breakdown.  ... 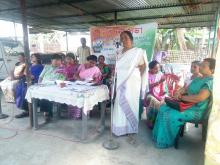 Congress gears up at Nazira

16 Mar 2016 - 5:31pm | SK Hasan
Congress party is gearing up for the upcoming poll in Nazira slated for April 4. Party candidate and sitting MLA Debabrate Saikia met  party workers and asked them to work hard in grassroot...