Assam governor JB Patnaik says that his government has done a lot to ensure development all on fronts. Opening the Assam assembly session on Tuesday Patnaik claimed that peace is back to the state to boost the process of development. But the opposition parties didnot allow the governor to continue his speech. With festoons a section of AGP and BJP members raised to register protest. They said the government has done only corruption and nothing else. This has forced Patnaik to cut short his speech. Later on Tuesday chief minister Tarun Gogoi who is holding the finance portfolio will table vote on account. Several bills would be moved in this session to be concluded on February 8.

8 Sep 2015 - 9:17am | AT News
Dr Himanta Biswa Sarma’s resignation is bound to pave the way for bye election in the Jalukbari constituency as the state has seven months to go to the assembly polls.BJP poll strategists want the... 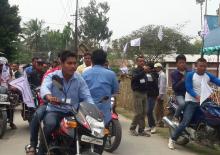