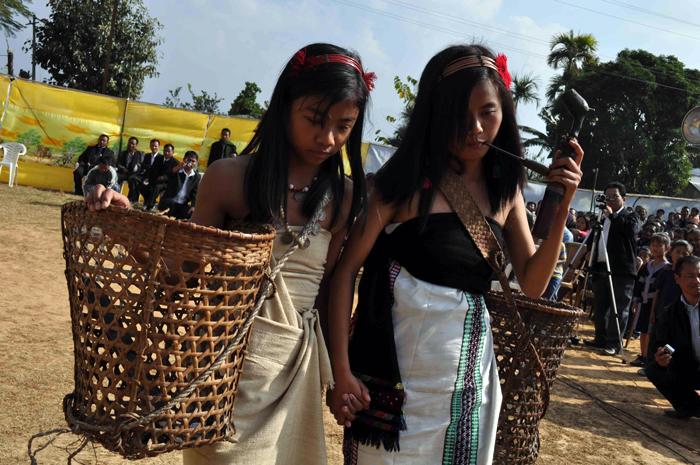 The People belonging to Biate community of Dima Hasao celebrated ‘Nulding Kut’ the "Festival of Renewal of Life” throughout the district today (Tuesday)with traditional fervor and gaiety.

Nulding Kut is one of the many festivals of the Biate tribe, which had been celebrated since time immemorial. The important and significant of this festival is that it is regarded as the "Festivals of Renewal of Life" by the Biate people. In the olden days the ancestors used to celebrate this prestigious festival during the early part of January every year on different dates in different villages. The ancient people considered this festival as a symbol for the beginning of a new year. The people observed this remarkable day by offering religious rites followed by social function like performance of cultural dances, singing of folk songs, drinking of liquor (Zu) and various kind of merry- making. The people of all ages especially the women dress themselves in their colourful customary attires (Nampuan). A village thus really wore a festive look on that day. People also indulge themselves in playing games and sports of various kind all day long. They enjoyed it as the beginning of a new life of the new year. Before they started new activities of life like cultivation, construction of dwelling houses etc: They enjoyed together during this festivals so as to renew their strength and determination before they enter the new year. The people were supposed to forgive and forget their short coming, sorrows and discontentment arising out of their past deed. Hence the occasion was also regarded as a day of forgiveness (Ngaidamna ni).

Another important features of this festivals is that it was celebrated as a day of Prayer led by the village priest (Thiampu) people assembled in one place and pray to God ('Puihitm) whole heartedly and with all humility and sanctity for the forgiveness of their past sins and errors (Siia! neh sin ichai). They also sought kindness and blessing from God for the prosperity in the coming year, in this way the people indeed renewed their faith and commitment before God on that day. Yet another interesting feature of this festival is that the elderly people met together in the house of the village chief (Siar Kalim) and held a village Durbar I Meeting (Devan). They sat down around a pitcher full of home made liquor (Zu). They sucked the liquor one after another sharing a single bamboo pipe (Thlongthli) while they discussed all about their agricultural activities, fishing, art of hunting and the administration of the village. Similarly, the youth of the village also had a field day during this festival. Young men and women were let outdoors by their parents because of the variety programmes they had to accomplish on that day. As a result the youths were able to mix-up together, could meet and talk face- to- face to one another and availed a rare opportunity for choosing their would be life partners (Nupui/Pasal).

Caring for children and adolescents with diabetes

13 Nov 2008 - 8:25pm | editor
The theme of this year's World Diabetes Day (14 November) is diabetes in children and adolescents. The global awareness campaign aims to bring the spot light on diabetes and highlight the message...

22 Apr 2009 - 1:28am | audityadutta
The students of Ternopil State Medical University, Ukrain celebrated the Rongali Bihu on April 16. Various performances such as bihu dance, songs, comedy shows were performed during the event. A...