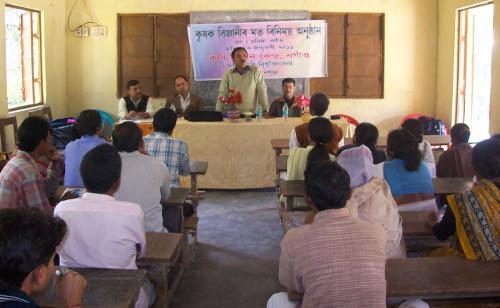 A Day-long interaction programme of farmers’-scientist was organised by the Krishi Vigyan Kendra(KVK), Nagaon at Pramila on January 7, a remote village in the west of Nagaon near Kampur. The programme was first of its kind in the locality, which was inaugurated by Dr T.P.Saikia, Programme Coordinator of the KVK. Addressing the gathering, Dr. Saikia spoke on the importance of the latest technology available with the research institutes in the field of agriculture and allied activities. He also briefly described the role of KVKs in livelihood improvement of rural masses. Dr. K.K.Sarmah, Principal Scientist of the Regional Agricultural Research Station, Shillongani also addressed the farmers on this occasion. He also discussed the role of integrated pest management in scientific crop production.

The interactive programme was led by Dr Saikia, programme coordinator of the KVK, where the farmers put forth their field level problems such as insects and disease incidence, low nutrient status of the soil etc in the field and vegetables. As beletvine cultivation is the main source of income for many households of the locality, the farmers raised a volley of questions on scientific cultivation betelvine. The scientists present responded to various queries made by the farmers on crop production and allied activities. Dr. B.Dutta, SMS(Animal Science) replied the questions on livestock production and management. Mr J Dutta, farm manager, briefly described the improved methods of rice cultivation through SRI. The programme was anchored by C.K.Deka of KVK. More than 50 progressive farmers including women farmers participated in the day-long programme.

20 Oct 2015 - 6:52pm | AT News Dimapur
A Nagaland girl is all set to represent India in the Miss World Beauty International contest in South Korea 2015. She is none other than Imlibenla Wati who was recently crowned Miss World Beauty...

21 Aug 2014 - 10:31pm | Hantigiri Narzary
The Bodoland Territorial Council(BTC) expressed displeasure over low fund allotment to the council from state share budgets as the council has been deprived from getting 12.19 percent as per...