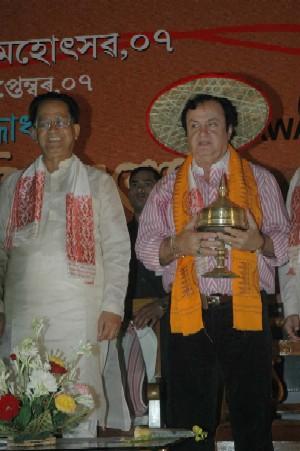 It was in the year 1935 that Assamese cinema made its entry into the world of entertainment with its first landmark movie Joymoti by Rupkonwar Jyoti Prasad Agarwala. Assamese cinema continued its journey in a slow-paced sensitive style, especially with the movies of Bhabendra Nath Saikia and Jahnu Baruah.

But despite its rich history, and its artistic successes, Assamese cinema has failed to make a lasting impression in the national level. Thouh the beginning of the 21st century saw a new trend emerging in this genre a trend that emphasised on the commercial success of films by toeing the style of Bollywood blockbusters. But the results were short lived as it could’nt stand a chance with its other Bollywood and Tollywood counterparts.
The Assamese film industry is fraught with innumerable bottlenecks be it financial constraints, technological shortcomings or competition with other states.

The concept of establishing mini cinema halls in the State in order to boost the crisis-ridden Assamese film industry has failed to show any positive results. The statement made by the State Cultural Affairs Minister recently that the mini cinema hall concept is yet to take off with only one such hall established and only a single application currently pending with the Government was, in fact, a revelation in itself. We have been witness to the cries of help by many Assamese film personalities over the years who have been demanding steps from the State government to let interested parties establish mini cinema halls. These halls, in turn, would be able to bring in both audiences as well as commercial benefits to the owner of the halls, exhibitors and producers of Assamese films – that was their contention. However, all pleas fell on deaf ears. Unfortunately the idea of boosting the industry by establishing mini cinema halls has failed to take off.

Inaugurating the State Film Award Festival 2007 on Friday asserted that films should play a positive and educative role and inculcate in the young generation a love and respect for our culture and history of harmonious existence. He further added that the government was keen to revive the dwindling film industry. He also announced to set up an archive to preserve the old Assamese films and expressed that the archive would fulfill a long standing need of the fraternity. He also urged the film makers to help the government revive the industry.

Hopefully other positive steps and initiatives by the government and film fraternity will soon overcome the dry spell and rekindle its flame among the common people.

Permalink Submitted by jaay on Thu, 06/12/2007 - 04:19
Assamese cinema has produced stalwarts like Bhupen Hazarika, Asit Sen, Sri Kulada Kumar Bhattacharjee, Jahnu Barua to name a few, but unfortunately with time, things have been turning from bad to worse. It is not as if we donÃ¢â‚¬â„¢t know the reason, it varies from lack of creativity due to disturbed environment, people moving from sensitive and light cinema to cheap entertainment and other factors which are not worth mentioning out here. Something concrete is required from the film makers, government can fund you but it cannot induce creativity, which is the back bone of any creative media, which includes cinema. Unfortunately, awards are falling prey to commercial interests, leading to downfall and demoralization of creativity. From one angle if we see, the people have shown the door to the cheap and below quality movies, which in one sense is fine too. People need good entertaining cinema with visual quality to mach to, Let us see how far people out there, who are in this field take the cue and present something worth to watch for. Good article, different.

Permalink Submitted by Sanjoy Chanda on Fri, 07/05/2010 - 17:48
We can not just keep on finding out problems. We got to do something. That is too shallow. Let's come forward and make the difference.

Permalink Submitted by farhad ali on Fri, 30/09/2011 - 03:33
need some major modern in assamese film.some types of sounds and video really motivate all the people if they get improvement

Permalink Submitted by Arshad on Sat, 08/10/2011 - 23:35
Off course we are backward in film industry in comparison to other states but sitting ideal is not its solution.....and it is our all the people of assam's responsible to make our film industry popular......and we the people can obviously do it if we wish...lets join hands to develop our state.....love assam

12 Nov 2008 - 2:35pm | editor
Its confirm. Both NDFB and ULFA were behind the serial blast that rocked the state on Octobe 30 in Assam with a toll of 84 people.An official statement of the Assam government has made it plain that...