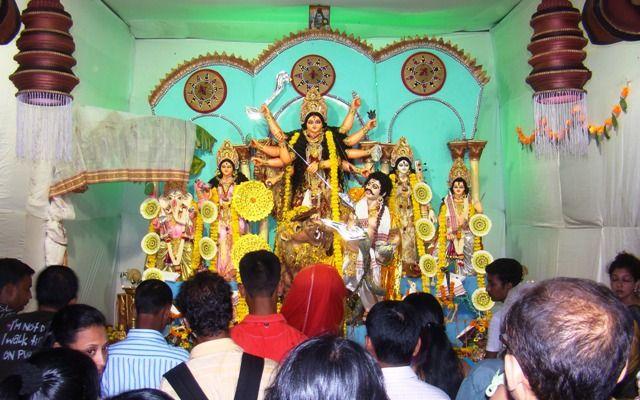 The Mumbai Asomiya Sarvajanin Durga Puja Samitee has celebrated the fifth consecutive Durga Puja since its establishment in 2006. The festival was celebrated from October 13-17 at Assm Bhawan, Vashi, Navi Mumbai.

The five day long festival was attended not only by the Assamese Community of Mumbai but also by the various communities in and around Mumbai. The puja rituals have been performed as per the tradition of Assamese Durga Puja. The idols have been adorned with the typical Assamese Clothing.On the occasion, the sacred soil and holy water have been brought specially from Kamakhya Temple of Guwahati and placed besides the Durga Idol.

The funding for the celebration was made from the contributions from well wishers and donations from the devotees. A part of the collection will be utilised towards the treatment of poor cancer patient came from Assam for treatment at Mumbai.

In connection with the festivity of the celebration, various cultural programmes also organised during the night of Saptami, Asthami and Navami.

3 May 2010 - 4:42am | editor
The court of Kamrup Chief Judicial Magistrate on Sunday remanded Ranjan Daimary to 14 days police custody after the NDFB chief was produced before the court. Daimary was produced in court three...