According to the Central Water Commission, the Brahmaputra is crossed danger level at Guwahati, Goalpara, Sibsagar, Dhubri, Dibrugarh, Nimatighat, Naharkatia and Tezpur.

This wave have affected 11 districts where vast tracks of farm land and a large number of human habitations have been submerged in Lakhimpur, Dhemaji, Dibrugarh, Sibsagar, Jorhat, Golaghat, Morigaon, Sonitpur, Dhubri, Goalpara and Barpeta.

The wave of floods has so far claimed two lives in two separate incidents in lower Assam.

The marooned people have no option but to take shelter on railway tracks, roads, raised areas, government schools and offices.

River island Majuli in Jorhat district was flooded following a breach in an embankment affecting thousands of people. Kaziranga National Park and Pobitora Wildlife Sanctuary have also come under the suring waters of the mighty Brahmaputra leaving immense inconveniance for the birds and animals. Rhinoceros, pygmy hog and wild buffaloes at the worls heritage site have been forced to move to the Karbi hills.

10 Jul 2018 - 6:54pm | AT Kokrajhar Bureau
KOKRAJHAR: Preparations are on final touch to organise the 3rd Northeast Kickboxing championship-2018 scheduled to be held from July 12 next at SAI centre ground in Kokrajhar. The sports event has... 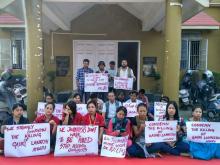